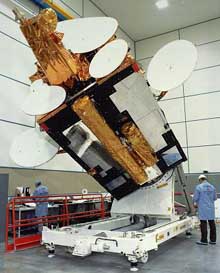 Olympus was an experimental communications satellite, originally known as LSAT and launched by ESA. At its launch in 1989, the largest civilian telecommunications satellite in the world, Olympus was primarily designed as a technology demonstrator. Its platform and payloads were built to test a range of space hardware and components, which would be necessary elements of future telecommunications satellites in Europe. As such, it demonstrated new concepts in orbit, such as steerable spot beams, 20–30 GHz repeaters, high-speed switchable multiplexers, and very high power traveling wave tube amplifiers. A dust grain from the Perseid meteor stream was blamed for ending the mission. Although Olympus remained intact after the collision, it lost so much thruster fuel in trying to correct its attitude that it became unmanageable.