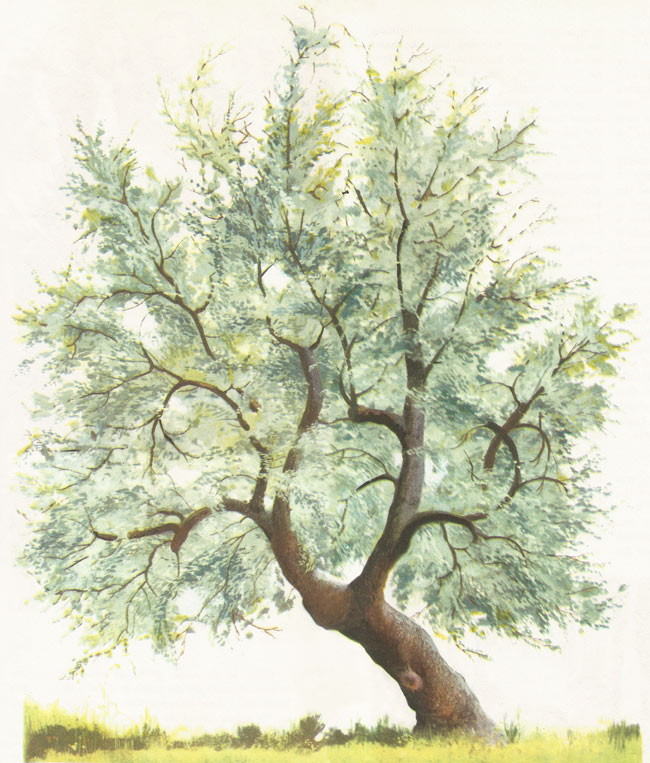 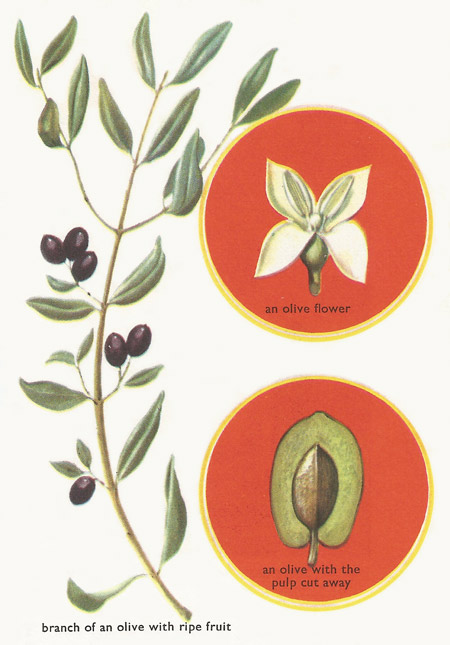 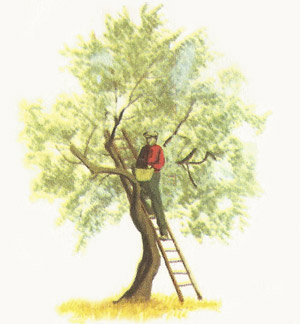 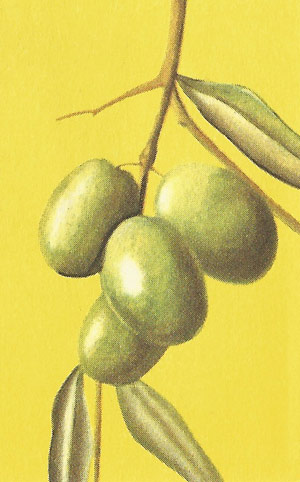 The olive tree had played an important part in the economy of the people who live around the Mediterranean since very early times. In the Bible story of the flood it was an olive branch that the dove brought back to the ark as evidence that the waters are subsiding. Today the dove, carrying its branch of olive, is the symbol of peace for the whole civilised world.

The importance of the olive comes mainly from the nutritious oil (i.e. oil of value as food) that is obtained from the fruit, together with the fact that olive trees will grow on mountain slopes and in dry, rocky soil. Land which would not support any other type of useful vegetation is thus able to produce a valuable crop. The olive, however, can only grow in a warm country which has no severe winter.

The wild olive tree, Olea europaea, probably originated in Asia Minor. It was grown on the island of Crete as early as 3500 BC and in Greece not much later, and must have been cultivated by man at a remote period of history.

It now grows all round the Mediterranean coast and has been introduced all over the world in regions with a suitable climate, such as China, South Africa, Australia, and California. The main producers of olive oil are, still, however, the Mediterranean countries of Spain, Italy, and Greece.

The cultivated tree is sufficiently distinct from the wild one to be given a different name: it is known as the variety sativa of Olea europaea.

The cultivated olive is a small tree, rarely exceeding 30 ft in height. It has evergreen foliage and is slow-growing, reaching an age of between 500 and 1,000 yr. It first produces fruit about its 15th year and continues to do so for several centuries. The wood is hard and close-grained and is of some value for cabinet-making. Olives are propagated mainly by cuttings, or by removing the large knots, or 'ovoli', which grow at the base of the trunk and which sprout if planted in the ground. Another method is to graft the variety desired on to wild olive-trees.

The leaves of the olive are a dark, dull green, leathery in texture and covered underneath with white hairs; this is probably an adaptation to prevent loss of moisture in dry climates. The leaves are attached to the twig in pairs, opposite each other, and are replaced every two or three years.

The flowers are small, white, and fragrant and are borne in clusters or racemes springing from the axils of the leaves; that is, from the point where the leaves are attached to the stems.

The flowers grow from the twigs of the previous year's growth. Of each cluster usually only one flower, at the most three, matures to produce an olive.

After fertilization the ovary of the flower swells and forms the fruit. This has the same form as a cherry or a plum, a pulpy fruit with a stone in it; the botanical name for it is a drupe. At first it is green, but as it ripens it turns black or dark purple.

In the Mediterranean countries olives are harvested from September to November. Those intended for eating are picked before they are ripe, but the fruit that is destined to produce oil is allowed to ripen on the tree.

Olives must be picked with care as they bruise easily, and bruised fruit quickly goes bad. Usually they are gathered by hand; if they are shaken down from the tree a sheet is held underneath to catch them.

Olive-trees vary very much in size and the quantity of fruit yielded annually by each tree ranges from 10 lb to over 100 lb or more. Exceptional trees will give as much as 300 lb of olives a year.


extraction of the oil

The very best oil, called extra virgin oil, is prepared from specially selected, fully ripe fruit. Probably the old method of pressing by hand yields the best oil of all; it is still used on farms in Italy, but this oil is a luxury product, made only for home consumption, and never produced in quantity for export. It is important to separate the oil from the residue as quickly as possible; otherwise it may go rancid, due to the formation of fatty acids.

For commercial production of oils the fruit is picked before it is quite ripe. The first pressing produces good quality oil. After this the pulp is pressed again with hot water; in ancient times oil produced in this way burned in lamps, and it is still called 'lampante'. Nowadays it is refined chemically and usually blended with first-quality oil for sale and export.

The pulp can be pressed yet again with the aid of chemical solvents; the oil that results from this process is used mostly for making soap.

Natural olive oil is very nutritious and digestible. The best quality is used almost entirely for human consumption: in salads, for cooking, and for preserving foods, especially fish. In the countries where natural olive oil is produced it largely takes the place of the animal fats used for cooking elsewhere.

Lower quality olive oil is valuable in the textile industry for wool-combing and great quantities are also used for making soap.

The average world production of olive oil is approximately 3 million tons a year; a gallon of oil weighs a little over 7 1/2 lb. Spain is the most important producer, as about 38% of the total comes from this country. Italy, Greece, Portugal, Tunisia, and Turkey follow in order of importance.

Almost the whole olive crop is grown for oil in Spain and Italy, and only a very small percentage is picked in these countries for use as table olives. In Greece olives are also grown mostly for oil, but large quantities of preserved olives are also exported. These are mainly black fruit (not green) which have been either preserved in oil or salted. The salted olives are known as Greek olives. In America olive culture is almost confined to California, and production is mainly of large-sized olives for the table.


how much oil does the olive tree yield?

On average 100 lb of olives gives 24 to 29 lb of good quality oil. The solid residue that remains after the first pressing can then be treated with hot water and chemical solvents to produce more oil of inferior quality. Another way of using this solid residue is to remove the stones from it and make it into cattle food.