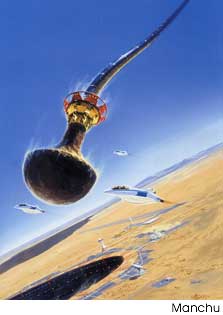 An orbital loop is a ring of satellites and space tethers around a planet designed to change the orbits of the satellites, stabilize them, and keep them in a particular orbit. Carbon nanotube research could prove to be the key technology with which to create materials of unprecedented mechanical stability and superb electrical conductivity. In this concept, an endless tether is launched into an eccentric Earth orbit. It is interspersed with winches and a segmented tube. A sounding rocket or a gun carries cargo to the tube. When the cargo enters the tube, it is accelerated by friction to the orbital velocity. Half of the orbital energy is transferred to the cargo, while the other half is wasted as heat. Momentum transfer is provided by electromagnets. The engineering aspects of such an orbital loop have been analyzed in detail by the Polish physicist Andrew Nowicki.

If combined with a similar loop system around the Moon, a "slingshot" system could provide a cheap Earth-to-Moon mass-transfer infrastructure. The mass required for an Earth loop would be on the order of 10,000 tons. The maximum tensile forces would not exceed 2 gigapascal. Potential applications would be the transfer of, for example, helium-3 from lunar strip-mining bases for nuclear fusion on Earth.