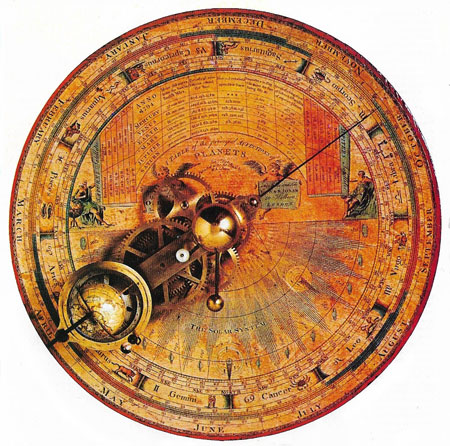 In the orrery shown here, made in 1790, the Sun is represented by a brass ball in the center. Round it move the three innermost planets. Mercury, Venus and Earth; an ingenious system of gears makes the planets move round the Sun in the correct relative periods, even though on a scale of this kind it is naturally impossible to give the correct relative distances. The lands and seas of Earth are shown and also the Moon in its orbit round Earth, which is inclined at the correct angle. When, by turning a handle, the mechanism is moved, the planets revolve round the Sun and the Moon revolves round Earth. More modern orreries are driven by clockwork, and in some the more distant planets than Earth and those discovered in the years after this model was made, are also shown.

An orrery is a working model of the Solar System showing the planets, possibly with some of their moons, in orbit around the Sun. Orreries are named after Charles Boyle, Fourth Earl of Cork and Orrery, who commissioned John Rowley in 1712 to make a copy of the first such device which had been invented in about 1710 by George Graham (1673–1751). The time scales of an orrery may be quite accurate, but size and distance proportions are of course wildly inaccurate.