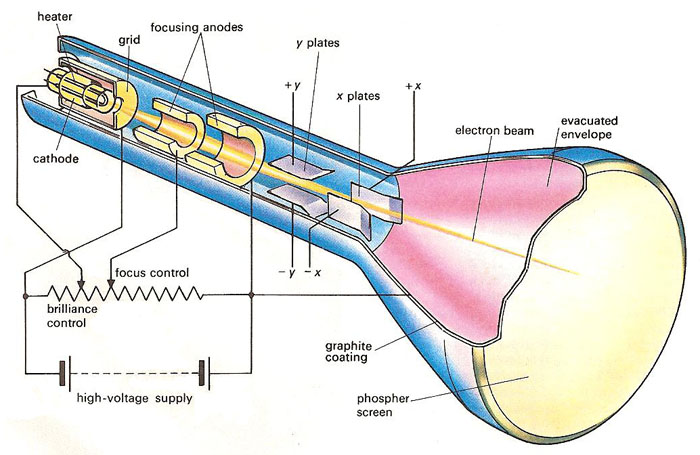 The electron tube used in a cathode-ray oscilloscope. Brightness is controlled by varying the grid current and focusing by varying the potential difference between the anodes. In use it is common to apply a time base to the X-plates to show the variation of a parameter with time. The electron beam represents a negative electric current which is drained from the phosphor screen via the graphite tube lining.

An oscilloscope is a device using a cathode-ray tube to produce line graphs of rapidly varying electrical signals. Since nearly every physical effect can be converted into an electrical signal, the oscilloscope is very widely used. Typically, the signal controls the vertical deflection of the beam while the horizontal deflection increases steadily, producing a graph of the signal as a function of time. For periodic (repeating) signals, synchronization of the horizontal scan with the signal is achieved by allowing the attainment by the signal of some preset value to trigger a new scan after one is finished. Most models allow two signals to be displayed as functions of time. Oscilloscopes usually operate from DC to high frequencies, and will display signals as low as a few millivolts.