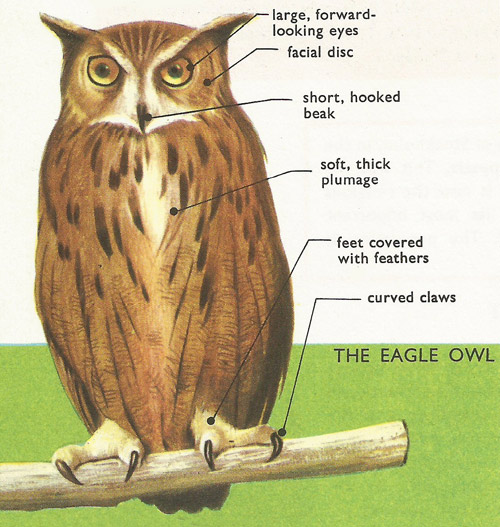 Characteristics of the Eagle Owl.

In the past, when people were so superstitious that they feared creatures of the night, owls were regarded as birds of ill omen. Their hooting and screeching were supposed to foretell disaster or death. In decades past owls were killed by gamekeepers, because they preyed on baby pheasants. But owls also destroy mice and voles in large numbers and certainly do far more good than harm. Today they are strictly protected in Britain.

In most people's minds owls are linked, as birds of prey, with eagles, hawks and falcons. All these birds have a hooked beak and live by hunting, but in fact owls form a distinct group. Scientists place owls in the order Trigiformes and the others in the Falconiformes. Since owls are active almost entirely at night, whilst hawks and eagles fly by day, the term 'birds of the night' fits the owls very well.


characteristics of the strigiformes

Consider the Eagle Owl as an example to illustrate the characteristics of owls.

Birds that see and capture small animals in the dark of night must have exceptionally efficient eyes. All birds have excellent eyesights, but in owls it is quite extraordinary. Let us look at a section of the eye of an owl and see how perfectly it is adapted for night vision.

Its efficiency is due to four main features:

• The great distance between the lens and the retina, proportionally much greater then in man. As a result a larger image is formed on the retina. A special organ called the pectin (from the Latin pectin, a comb, because it is toothed) assists in focusing the lens; that is, in adjusting it to various distances.

• The very large number of sensory cells (rods and cones), that is, light-sensitive nerve cells, in the retina. There are about 10,000 per mm2 while humans have only 2,000. The bird therefore has a sharpness of vision five times greater than our own.

• The visual purple of the retina with which the rods are impregnated. The visual purple is a red or purple substance, chemically a protein, that is extremely sensitive to light. Man and animals that are active by day have a relatively small quantity, but owls are exceptionally well provided with it. Their eyes are therefore abnormally sensitive and can function in a very dim light. They can see a mouse on the ground where we would be groping in the dark to find our way.

• The very large opening of the pupil, which collects every available ray of light. Owls are exceptional among birds in having the eyes placed on the front of their head, like our own. In other birds they are on the sides of the head. Owls and humans have binocular vision, that is, they can look at an 1) object with both our eyes at once.