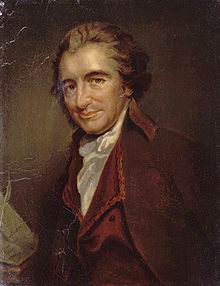 Thomas Paine was an English-born radical political writer who sailed for Philadelphia in 1774 and subsequently argued for American independence. After serving with the American army, he returned to England in 1787 and wrote in support of the French Revolution. Arraigned for treason, he fled to Paris but was imprisoned for offering the French king asylum in the USA. While incarcerated he wrote The Age of Reason (1793) in which he argued aggressively that Christianity and pluralism were incompatible:

[T]o believe that God created a plurality of worlds at least as numerous as what we call stars, renders the Christian system of faith at once little and ridiculous and scatters it in the mind like feathers in the air. The two beliefs cannot be held together in the same mind; and he who thinks that he believes in both has thought but little of either.