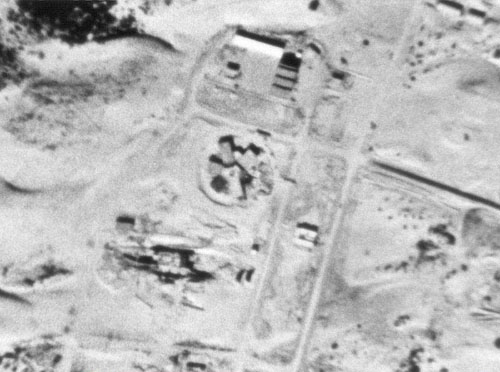 Part of Palmachim Air Force Base and missile launch site photographed from space in the 1960s by a KH-4 Corona satellite. NIMA declassified imagery.

Palmachim is an Israeli air force base and classified launch complex and missile test site, located south of Tel Aviv at 31° 53' N, 34° 41' E. (The facility is also sometimes referred to as Yavne, which is the urban area near the Soreq nuclear research center.)

It is from here that the Shavit satellite launch vehicle is deployed. Due-west launches over the Mediterranean are required to avoid overflying Arab countries, resulting in unique orbital inclinations (142°–144°) and direction. Launches are also limited to retrograde orbits because of range safety restrictions.

Palmachim Air Force Base was built by the IDF/AF in the 1970s, originally as a test site for missiles conducted by 151 Squadron.