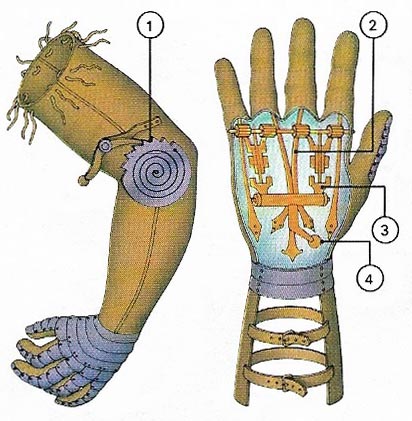 Ambroise Paré designed this artificial arm. A ratchet and pawl (1) locked the elbow in any position; springs and catches (2, 3, 4) opened and then closed th efingers.

Ambroise Paré was a French surgeon whose many achievements, such as adopting ligatures or liniments in place of cauterization and introducing the use of artificial limbs and organs, have earned him regard as the father of modern surgery. In 1537 Pare was employed as an army surgeon and in 1552 became surgeon to Henry II, one of four French kings he served during his lifetime. As an army surgeon, he introduced new methods of treating wounds, described in his book The Method of Treating Wounds Made by Harquebuses and Other Guns (1545), and revived the practice of tying arteries during surgery instead of cauterizing them.