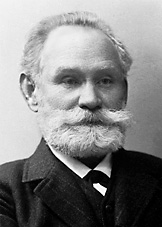 Ivan Pavlov was a Russian physiologist best known for his work on the conditioned reflex. Regularly, over long periods, Pavlov rang a bell just before feeding dogs, and found that eventually they salivated on hearing the bell, even when there is no food forthcoming. He also studied the physiology of the digestive system, and for this he received the 1904 Nobel Prize in Physiology or Medicine. His major works are Conditioned Reflexes (1927) and Lectures on Conditioned Reflexes (1928).