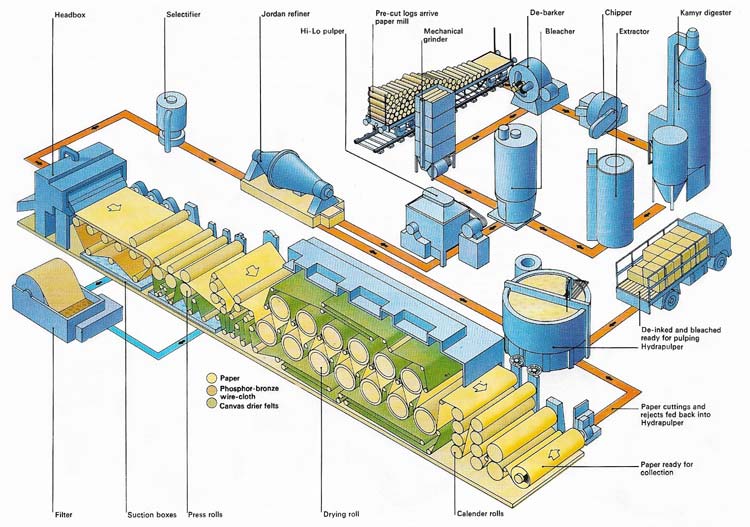 Fig 1. The modern papermaking process is shown here in a diagrammatic and simplified flowchart. Pre-cut logs arrive at the paper mill. They then pass to the de-barker which has cutters that penetrate the bark and force it off without damaging the timber. The wood may then go to the chipper. That machine has rotating knives that could wood into pieces about 3 mm (0.125 in) thick. From there it goes to the Kamyr digester. Here treatment with boiling chemicals yields a chemical pulp from which chemicals are removed at the extractor. Alternatively, de-barked logs may then pass to the mechanical grinder. The two streams meet in the bleacher, pass to the Hi-Lo pulper and from there to further treatment in the Jordan refiner. De-inked and bleached waste paper is pulped in the Hydrapulper by means of a spinning multivane motor and joins the other pulp at the refiner. All the pulp moves on to the selectifier, which is a pressurized sieve, and into the headbox. There the pulp is adjusted for consistency and fed at a controlled rate through a sluice gate on to a fine phosphor-bronze wire-cloth which is travelling at high speed. At this point suction boxes extract most of the water and the paper then forms a web. The frained water is filtered out; both it and the recovered pulp may be recycled. The web is pressed to the required thickness in the press rolls and then dried over drying rolls. It is given its finish in the calnder rolls. The paper cuttings are not wasted but are fed back into the Hydrapulper. Finally the completed paper roll is ready for collection and use. 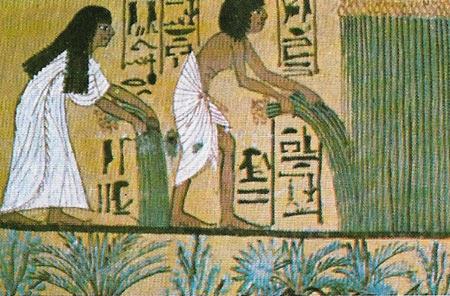 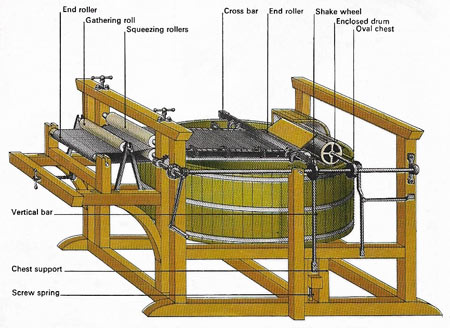 Fig 3. Nicholas-Louis Robert (1761–1828) patented the first paper-making machine in 1799. It made paper in great lengths using a continuous conveyor belt system and was driven by turning a handle. The prepared mixture of water and pulp was poured into an oval chest then picked up by rotating copper bars and discharged on to the upper surface of an endless wire mesh running on two end rollers. The pulp passed between felt-covered squeezing rollers, removing most of the water so that the web lifted off the wire and could be coiled on a roller. The tension of the wire was adjusted by a screw. The wire was shaken by a cross-bar driven by a wheel. This cross-bar could also be raised or lowered to alter the slope of the wire and thus the water loss. 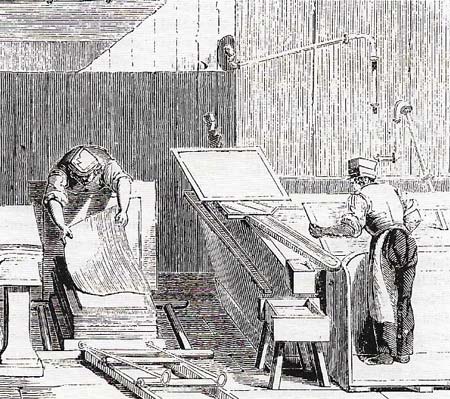 Fig 4. Ways of making paper have changed little in 2,000 years. A suspension of cellulose fibers is made by beating the fibers in water, then separating and soaking them. The wet sheet is pressed and heated to remove the water and then further refined.

Paper is felted or matted sheets of cellulose fibers, formed on a wire screen from a water suspension, and used for printing or writing on. It is one of the most common and everyday materials of industrialized societies and that mankind has been using for nearly two thousand years. In addition to its use for writing on, paper is used for containers and wall decoration, and in many other ways.

Papyrus, the writing material of the ancient world, predated paper by at least 3,500 years (Fig 3). It was made from the papyrus reed (Cyperus papyrus), an aquatic plant of the sedge family that still grows in the Nile Delta. It was prepared by laying strips of the reed side by side and then crossing them with other strips. It was then soaked in the water of the Nile, which created an adhesive and stuck the strips together. Finally, the sheet was hammered and left out to dry in the sun. Any surface roughness was removed by polishing with ivory or a smooth shell.

Rags and cloth – still used for special high-grade papers – were the raw materials used for making paper until generally replaced by wood pulp processes developed in the mid nineteenth-century.

Millions of trees are harvested every year solely to make paper. After arriving at the pulp mill the logs are stripped of bark and then pulped by one of three methods. Mechanical pulping normally uses a revolving grindstone. In full chemical pulping, wood chips are cooked under pressure in a solution that dissolves all but the cellulose: the kraft process uses alkaline sodium sulfide solution; the sulfite solution uses various bisulfites with excess sulfur dioxide. Semichemical pulping employs mild chemical softening followed by mechanical grinding.

The pulp is bleached, washed, and refined – i.e., the fibers are crushed, frayed, and cut by mechanical beaters. This increases their surface area and bonding power. At this stage various substances are added: fillers (mainly clay and chalk) to make the paper opaque, sizes (rosin and alum) for water resistance, and dyes and pigments as necessary. A dilute aqueous slurry of the pulp is fed to the paper machine, flowing onto a moving belt or cylindrical drum of fine wire mesh, most of the water being drained off by gravity and suction. The newly-formed continuous sheet is pressed between rollers, dried by evaporation, and subjected to calendering. Some paper is coated to give a special surface. Pigments to color or to improve its whiteness – titanium dioxide is used – may also be added. Both the beating and the additives influence the appearance and the character of the surface.

The papermaking machine most often used   known as a Fourdriner machine   has three main sections. At the wet end the slushed pulp of beaten fibers flows on to a moving band of finely woven wire or plastic mesh. There, aided by suction, much of the water drains away, leaving the fibers and most of the additives on the mesh. The wet "web"of paper runs on to the press section where it is carried on felts and passes between rollers that remove more water. The web, by now much firmer, is finally transferred to another felt surface in the drying sections and passes over as many as 60 drying cylinders.

Papermaking machines, some of which are more than 75 m (25 ft) wide, operate at a rate of more than 900 m (3,000 ft) per minute. Pulp, which enters the machine with more than 99% moisture, is transformed in a matter of seconds into finished paper with no more than five to ten per cent moisture. This paper is then wound on to a reel and is sometimes processed even further. It may be remoistened and passed through rollers to impart a polished effect known as calendering, or it may be coated with china clay and latex to produce high-quality art papers.