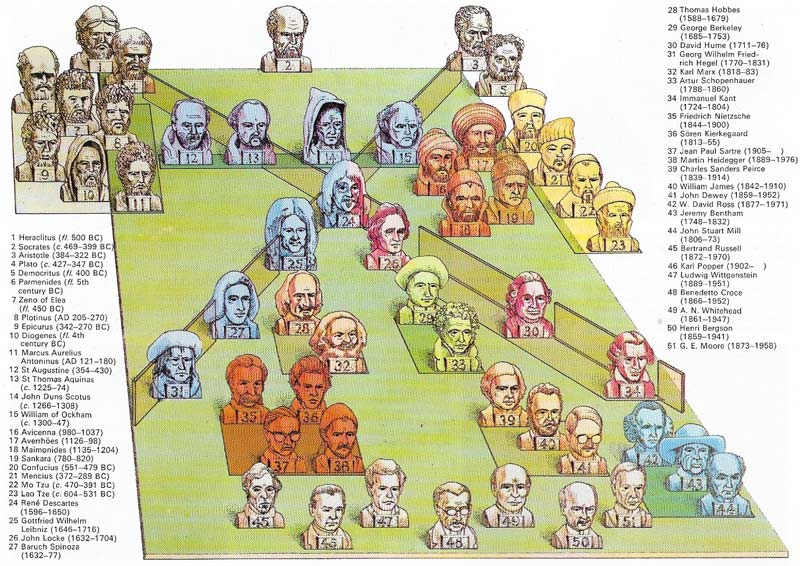 Classifying philosophers is not an easy task, but this chart does bring out a few major similarities and dissimilarities, as well as a few major lines of development. The Chinese (20–23) are shown as peripheral if only because their work is not, in the strict sense, philosophical. The Greeks are placed first and at the top because they created the ester philosophical tradition. Aristotle (3) and Plato (4) stand out from the rest in both influence and achievement. After the collapse of the old pagan world, thinkers labored for centuries to reconcile its philosophical achievements with, and to put them at the service of, religion: Christians such as Augustine (12), Aquinas (13), Duns Scotus (14), and Ockham (15); and also Maimonides (18) in Judaism and Avicenna (16) and Averrhoes (17) in Islam. Descartes (24) is at the center of the picture as he laid the foundations of modern philosophy. By persuading succeeding generations that private consciousness is the only sure starting point for knowledge, he made the epistemological problem fundamental: Do we know, and is so how, anything of the universe? One line of development then passes through Locke (26), Hume (30), and Kant (34) with the emphasis on discovering the nature and limitations of our learning apparatus. Another line, by way of Leibniz (25), Spinoza (27), and Hegel (31), takes up Descarte's rationalism. The existentialists (35–38) can be seen as reacting against a rationalist picture of the world, as can the pragmatists (39–41) who were concerned with practical bearings. Of the 20th-century group Wittgenstein's (47) works are most discussed by philosophers. And although Russell (45) was most in the public eye, it is Popper (46) whose ideas are having most influence. 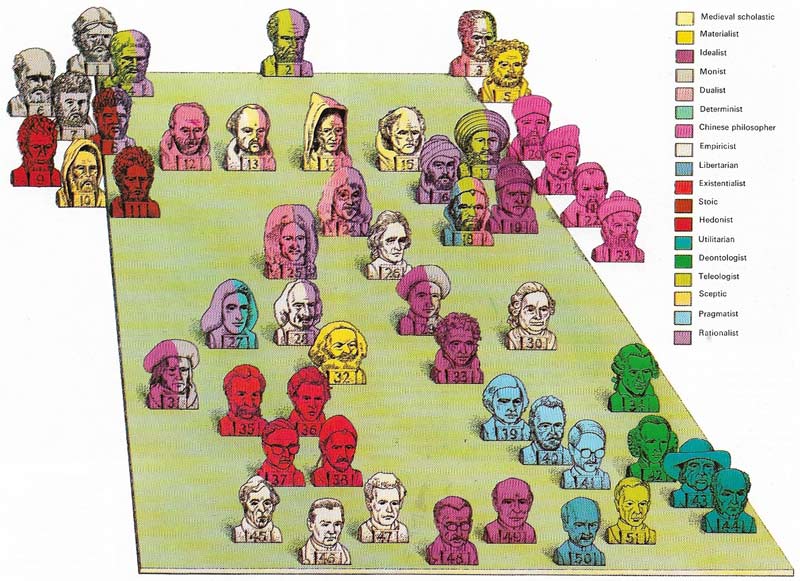 Philosophers can also be divided according to where their strongest interest lies. Within the field of metaphysics, materialists believe that matter is the only kind of entity that exists in contrast to idealists who hold that matter is an illusion. Monists believe that only one kind of ultimate stuff exists, while dualists maintain there are two kinds – mind and matter. Determinists hold that events are caused by other events and are predictable according to laws; libertarians that there are uncaused events – human free will. In epistemology, the study of knowledge, the empiricists trace the truth of propositions to observations and experience; positivists are extreme empiricists claiming that anything that is neither a part of logic and mathematics nor of empirical science is meaningless. Rationalists claim humans have innate ideas that are prior to experience and necessarily true. Pragmatists claim that knowledge comes from practical action. Skeptics deny that any knowledge is possible because our senses and reason are so misleading. In ethics a teleologist maintains that the concept of good is more basic than right (right action is determined by its consequences). The deontologist holds the opposite – an action is right or wring regardless of the value of the consequences. Utilitarians measure the goodness of an act by its utility. Hedonists maintain the only thing good in its own right is the experience of pleasure or the absence of pain. Stoics emphasize the practical aspect of philosophy as a guide to living. Reason, not our desires, should be our guide to action. Existentialists maintain that man's existence precedes his essential nature which is not given to him but is made by him in the choices he makes. 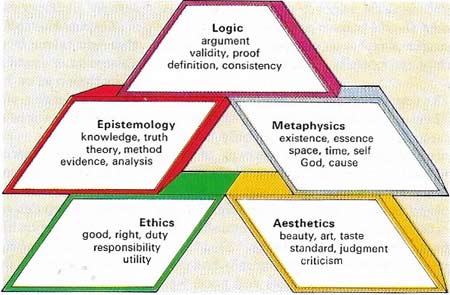 The traditional labels for branches of philosophy are all more or less unsatisfactory because what earns its place under one heading will often serve under another. Metaphysics is defined as the search for fundamental categories. Ultimately what sorts of things are there? Epistemology asks whether we know, what we know, and how we know. Answers to general epistemological questions are thus in one aspect metaphysical or have metaphysical presuppositions and implications. Logic is the study to valid and invalid forms of argument. Philosophical ethics investigates logical characteristics of moral discourse. Aesthetics deals with appreciation of beauty. Shown here are some of the concepts that are examined in the various branches.

Philosophy is classically divided into the major fields of logic, the theory of knowledge (epistemology), metaphysics, ethics and aesthetics. Each studies a set of concepts that constitute its subject matter.

Some important concepts discussed in metaphysics are existence, essence, space, time, self, God, cause, event, change, permanence, determinism and free will.

The question of free will and determinism is a battleground shared by the philosophies of many disciplines. Because the issues are so easily clouded, this is an area where the philosopher is needed and can make a significant contribution. The genuine issues are, as always, issues of meaning, presupposition, implication,, compatibility and incompatibility. How far are the apparently deterministic presuppositions and implications of work in this or that specialist field compatible or incompatible with everyday commonsense assumptions about action and choice?

Ordinarily we do not think the world changes randomly. We think that some kinds of events are regularly followed by other kinds of events. One we call the cause, the other the effect. A scientific law states a causal relation between events; for example, that mercury expands when heated.

Determinists, such as Baruch Spinoza, say that every event has a cause, including choices, decisions and human actions. It follows therefore, that man does not have free will. However Libertarians, such as Henri Bergson, argue that moral responsibility is not possible in a wholly determined universe. We cannot blame or praise a person for an act if they could not have done otherwise. Libertarians must, therefore, try to show that the will is not invariably predetermined and that there is an element of self-determination in our actions, choices and decisions.

The views of David Hume are particularly relevant to the problem of causation and of free will. His criticism of the idea of necessary causal connections is one of the landmarks of the history of philosophy. Hume's thinking can be illustrated by the example of one billiard ball striking another. Hume denies that there is a power in the first ball that causes the second ball to move, and says that our idea of such a causal relation is only a feeling produced in us by experience of the repeated conjunction of events. Objectively, a causal law is derived from merely a regular succession of two or more events.


The theory of knowledge

Concepts central to discussions in epistemology are knowledge, truth, theory, method and evidence. For example, is the concept of "know" the same in the expression "I know the sum of two numbers" as it is in "I know my own name"?

Knowledge and truth (and falsity) are two concepts intimately interconnected. We can be said to know something only if what we believe is true. I cannot say that I know 5 + 7 = 11 because that equation is false and because the idea of false knowledge is self-contradictory. It would seem, then, that I cannot say I know anything unless I can also say that I know that what I say is true.

What do I have to know in order to know that some proposition is true? Three major theories of truth are correspondence, coherence and pragmatic certainty.

One view is that what I am thinking, say that the apple before me is red, is true because it corresponds with the fact of the apple's being red. Two difficulties with this view are urged. The first is that we only experience the sensory effect that the supposed red apple has on me, never the red apple out there itself. To say, then, that "the apple is red" is true because it corresponds to the fact, is like claiming that I know a portrait corresponds to a face even though I have never seen and can never see the face.

The American Pragmatists Charles Sanders Peirce and John Dewey held that our knowledge of truth is acquired through a process of verification. Our thought about the redness of the apple enables us to anticipate its ripeness, and so, further, to anticipate its sweetness. The truth of this is verified when future experience of the apple is in accord with what we predicted.


Other areas of philosophy

Other sets of concepts that philosophers study can be classed under the heading of "philosophy of" such as the philosophies of art, language, politics, history, science (natural and social), law and mathematics.

Philosophy has links with both arts and sciences, influencing them and being influenced by them. Pure mathematics, for example, inspired the philosophical thinking of the Rationalists. Of these Rene Descartes and Gottfried Leibniz were themselves also major creative mathematicians; while Plato's thought has stimulated generations of philosophers to think of mathematical entities, such as numbers and geometrical relationships, as timelessly existing. Both the theories of Newtonian physics and Darwinian evolution have had a major impact on the development of philosophical thinking.