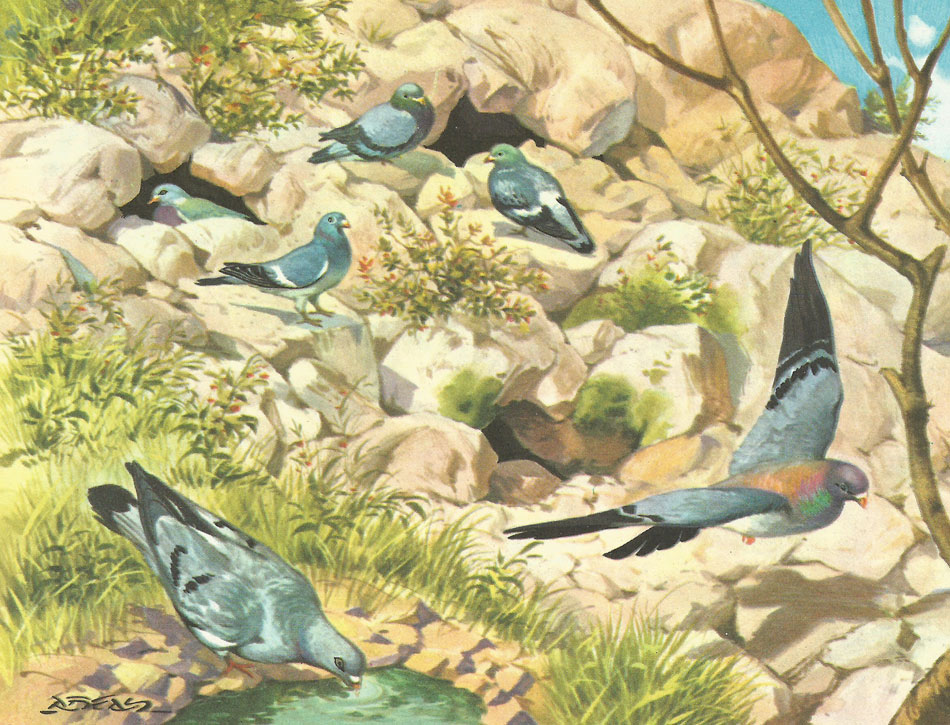 Although they are all derived from one species, hundreds of years of selective breeding has produced many different types of domestic pigeons, just as it has of other animals which have long been domesticated by man. In the case of pigeons it has always been in the direction of producing curious or beautiful birds, rather than useful ones. We now have pigeons of many colors, from white to almost black, and of odd, unnatural shapes as well. The pouter and fan-tail pigeons are examples of this. Racing pigeons are close to the natural, ancestral type.

Pigeons and doves are a distinct group of birds, found all over the world except in very cold regions. There is no real distinction between a pigeon and a dove; these are just two names for the same sort of bird. Altogether about 300 species are known, of which four are found in Britain.

By far the most common of these is the wood pigeon (Columba palumbus). It is a big, handsome bird, gray, with the wings and tail black-tipped and the neck glossed with green and purple and bearing a white ring; sometimes it called the ring dove. It coos in a repeated phrase of five notes that is both tuneful and attractive, but unfortunately its greedy appetite makes it one of the most harmful of birds. Almost any farm crop may be attacked – grain, peas, or kale – and a flock of several hundred of these big birds can do immense harm in a short time. They will also pick up grain sown as seed, and may descend on a garden and quickly reduce cabbages and other greens to stumps with only a few torn and shredded leaves left on them. They nest in trees and continue to breed all through the spring and summer. Hidden among the thick foliage, the nests are very hard to see.

The stock dove (Columba aenas) is rather smaller than the wood pigeon, and darker gray, with no white ring on the neck. It is less common, but the two often flock and feed together. The stock dove makes its nest in holes in trees or rocks or sometimes in old buildings.

The birds shown in the picture at the top of the page are rock doves (Columba livia). They are found wild only on rocky coasts, where they breed in holes in the cliffs. They are rather like stock doves, but are distinguished by a pale patch above the tail and two black bars on the wings. The rock dove is of great interest, as it is the ancestor of all domestic pigeons.

The turtle dove (Streptopelia turtur) is very different from our other three pigeons. It is much smaller, is reddish-brown spotted with black above, and has a long tail tipped with white. It is a migratory bird, visiting us only in spring and summer to breed, and is gentle and beautiful and perfectly harmless.

Pigeons' nests are of two types: either the birds breed in holes in cliffs, like the rock dove, and in holes in trees and buildings, like the stock dove; or they make a little raft of sticks in a tree or bush. The nests of the wood pigeon and turtle dove are of this second type, and sometimes you can actually see the eggs from below through the structure of the nest. Whichever type of nest is made, the number of eggs laid is almost always two, and they are always white.

Most birds, even those which feed on grain, give insects and other animal food to their young; vegetable food is probably too indigestible for young fledglings. Pigeons solve this problem in another way. While they are nesting a whitish nutritious is produced in the crop of the parent birds, and the young are fed on this, plunging their heads down their parents' throats to get it. The substance is sometimes referred to as 'pigeon's milk', but it is produced by both sexes. A week or so after hatching a certain amount of half-digested grain is regurgitated and fed to the young, and they are gradually taught to peck and seeds and other vegetable food for themselves.

Newly-hatched pigeons are blind with bluish-black skin and sparse tufts of yellow down. Soon the down becomes thicker until it covers the body, and then it is replaced by the juvenile plumage. They fly about a month after hatching.

Pigeons, derived from the wild rock dove, were domesticated quite early in the history of mankind: the ancient Egyptians had them in 3000 BC. No doubt they were used as food, but they were probably also kept for their beauty and pleasant voices. Even in early historic times pigeons were used as messengers because of their 'homing' instinct.

Pigeons will find their way back over great distances to the place where they are accustomed to roost, and of course they fly very swiftly, much faster than any means of transport available before our present mechanical age. Clearly this makes them an ideal means for carrying messages, and in AD 1150 the Sultan of Baghdad had a well-established pigeon post. Since then they have been used a great deal for this purpose, especially in time of war, when messages must be not only swiftly conveyed.

Pigeon racing has also been a favorite sport. For this a pigeon is trained by its owner to fly home to the place where it was bred. At first it is released near home, and then progressively farther and farther away. For the race it is released a long way from home (usually far beyond the training area and its homing flight is carefully timed.