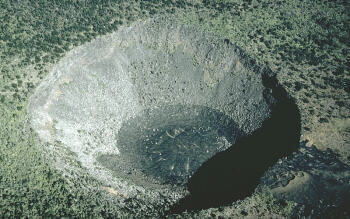 Aerial view of Hi`iaka pit crater on the east rift zone of Kilauea Volcano, Hawaii. The floor of the crater is covered by solidified lava that poured into the crater from the lower right (note black lava flow at crater rim). Credit: J. D. Griggs / US Geological Survey.

A pit crater is a circular-shaped crater formed by the sinking or collapse of the ground. Fissures may erupt from the walls or base of a pit crater, but pit craters are not constructional features built by eruptions of lava or tephra. Pit craters may also partially fill with lava to form a lava lake. They are common along rift zones of shield volcanoes; for example, Mauna Loa and Kilauea volcanoes in Hawaii. No one has observed the formation of a large pit crater, but they are thought to form as a consequence of the removal of support by withdrawal of underlying magma.