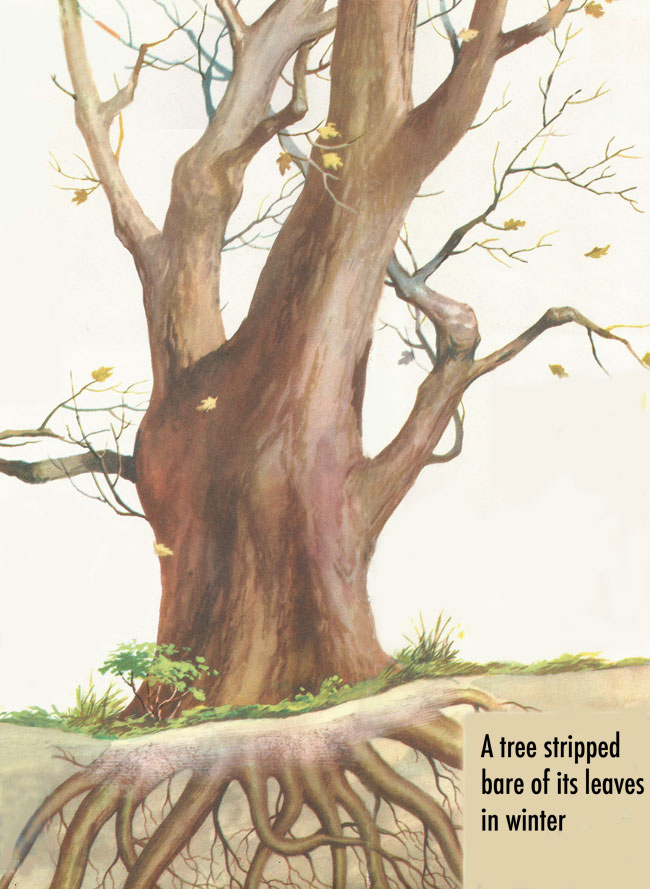 A tree stripped bare of leaves in winter.

The branches bear buds, which are the most precious part of the plant. They are the undeveloped shoots, made of young and vital cells, which will grow into new branches, new leaves, and new flowers. The plant protects them from the cold with an outer covering of very strong, overlapping scales which fall off in the spring.

Plants rest in winter. During the spring, summer, and autumn their various parts have carried out their work of feeding, breathing, blossoming, and producing fruits and seeds, so that during the winter they need a period of inactivity in which to rest. Most perennial plants (which do not die at the approach of winter, as annuals do) and in particular deciduous plants, that is those that shed their leaves, rest from autumn to spring. During this time the activities of their various parts slow down and the plant are in a state of dormancy or suspended animation.

What does this slowing down of the plant's activities mean? Simply that all the cells forming the plant are at rest. I order to rest the cells must contain very little moisture. When the molecules of which the cell is made are full of moisture, they swell and spread over a far greater surface. This allows certain changes to take place within the plant, through the action of the green coloring matter chlorophyll, when certain mineral substances reach the cells. But if the cell lacks moisture these chemical changes cannot take place.

This is why all the vital activities of the plant have to be reduced to the minimum necessary for the plant to live. In winter the cells of the plant contain very little moisture; they are, so to speak, dehydrated. Most of the water contained in the plants evaporates in the autumn through the thousands of tiny pores in the leaves which are called stomata (singular, stoma). Evaporation through the stomata would be of no use if the roots continued to absorb water. So little by little the action of the roots ceases as well. As the temperature of the soil falls, the cells of the root hairs are less easily penetrated by water and the process of making and absorbing food almost comes to a stop.

By this time the leaves have become quite useless. However, they contain several useful mineral salts which the plant needs, so they cannot be discarded just because winter is approaching. So in the autumn the plant makes a selection; the substances it does not need, such as calcium salts and silica (a mineral from which many rocks are made) remain in the leaf and are discarded eventually, while the minerals such as nitrogen, phosphorus, potassium, magnesium, etc., which the plant does need, pass back into the trunk or woody stem of the plant, through the veins of the leaves. They are stored there, as deposits, in the deeper layers of the bark known as the medullary rays. In plants that are not woody something of the same sort happens underground. The potato plant stores the substances it needs in its underground tubers.

Since the leaves are now useless and contain only unwanted substances they can be shed. The plant now forms a scar, known as an abscission layer, at the base of the leaf-stalk (petiole) so that an open wound will not be left when the dead leaf finally drops off.

The tree is now left without leaves, with its wood dry and hard, and with a store of mineral salts. It is protected from the cold and wet by bark, which is mainly made of cork. The bark is a good protector because it is a poor conductor of heat and can therefore insulate the plant against the cold. It is formed of layers of very compact cells through which air, also a poor conductor, can pass.

Cold might penetrate into the plant, however, since at intervals on the bark are tiny holes, called lenticels, between the cells, through which oxygen from the air enters. But to keep the cold out there is a tiny lid of flat woody cells under each lenticel, which closes the hole.

What about evergreen plants? Many people think that evergreen plants such as holly, privet, rhododendron, cypress, fir, pine, and so on never lose their leaves, not even in winter. But this is not quite true: evergreen plants never lose all their leaves at the same time, but in spring, when the new leaves are ready, the old ones drop off, carrying away all the substances the plant does not need. The leaves of these evergreen plants must be able to stand up to the cold. So for this purpose the starch contained in the leaves is transformed into sugar (saccharose). In summer, therefore, the leaves are full of starch and in winter of sugar. Sugar helps the leaves to withstand the cold. (We, too, eat foods in winter containing carbohydrates, such as sweets and fats. The carbon they contain produces a great deal of heat as it is burnt up by the muscles.)