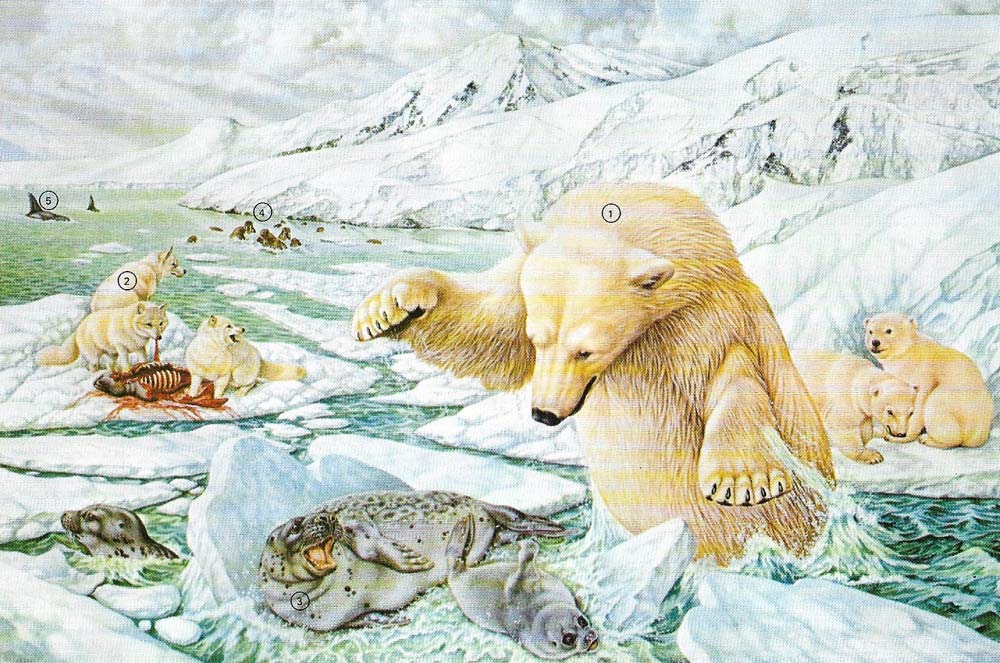 Fig 1. Two carnivorous predators, the polar bear (Thalarctos maritimus) (1) and the Arctic fox (Alopex lagopus) (2), head the food chain of the ice cap surrounding the North Pole. The polar bear feeds chiefly on the seals of the species Pusa hispida (3) and the young walruses (Odobenus rosmarus) (4), although it may itself fall prey to the killer whale (Orcinus orca) (5). The Arctic fox feeds mainly on the carrion left behind by the polar bear. Seals feed on abundant fish and squid while the walrus grubs on the ocean bottom looking for mollusks and crustaceans. In the early spring young seals and polar bears are born in caves shaped out beneath the snow. The polar bear is protected from the cold by a thick fur coat that traps a layer of insulating air. In contrast the seal is insulated by a layer of subcutaneous fat or blubber.

Fig 2. As winter approaches all pregnant female polar bears, most other females, and some adult males seek out a rock or ice den and spend the cold months in sleep. Here, too, the young are born – usually two cubs which remain with their mother for two years. 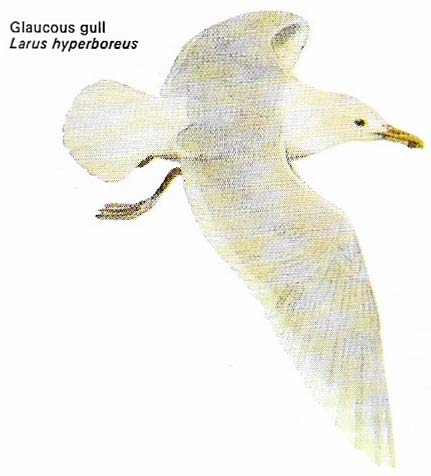 Fig 3. A skilled predator – like some other gulls – the glaucous gull nests on Arctic and North Atlantic cliffs and islands. It takes a wide variety of prey ranging from small mammals to the eggs of other birds. 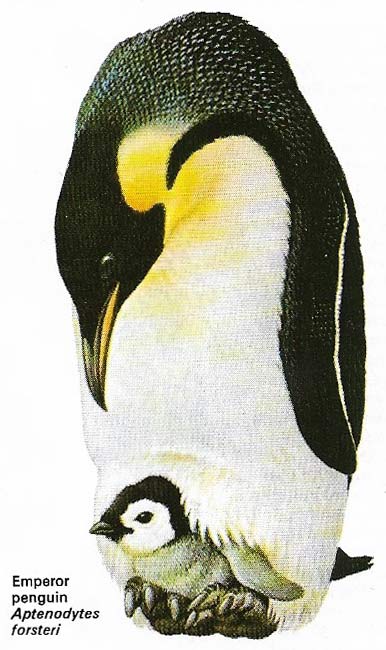 Fig 4. A skilled predator – like some other gulls – the glaucous gull nests on Arctic and North Atlantic cliffs and islands. It takes a wide variety of prey ranging from small mammals to the eggs of other birds. 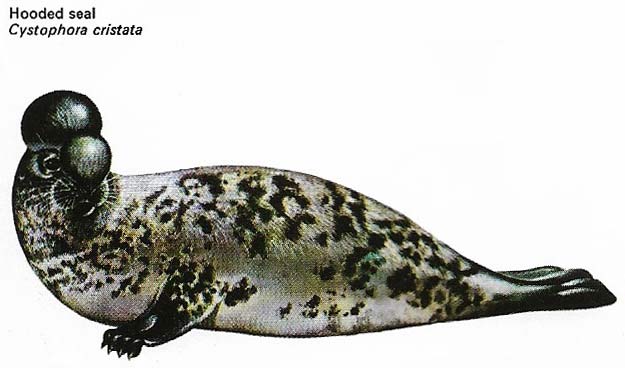 Fig 5. The grotesque node of the hooded seal inflates during the breeding season to intimidate his rivals and – paradoxically – to attract females.

Fig 6. The banded seal, found exclusively in the Arctic waters of the Pacific south and west of the Bering Strait, is one of the smallest of seal species. 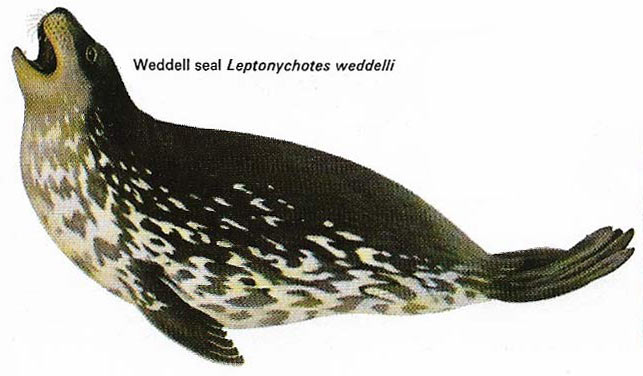 Fig 7. The southernmost mammal, the Weddell seal, chews breathing holes in the ice when the sea is frozen over./p> 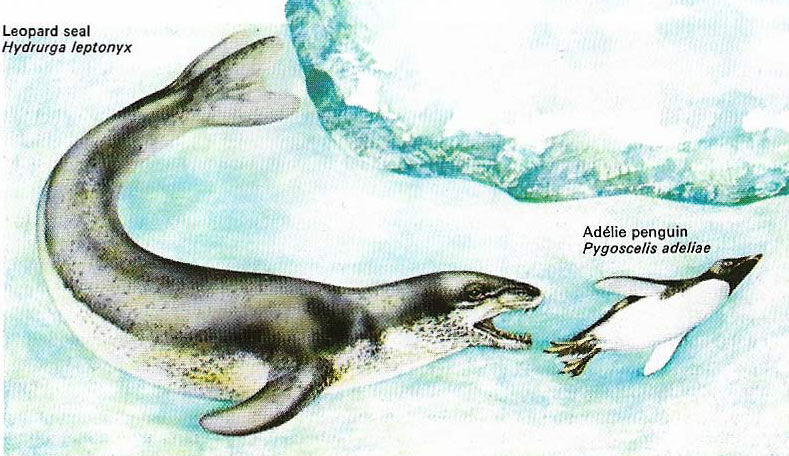 Fig 8. The hunter of the southern oceans is the leopard seal. This solitary animal hunts along the edge of the pack ice in search its favorite prey – the Adélie penguin. This continual persecution produces one of the sights of the Antarctic – the reluctance of individual Adélies to enter the water (the time when they are most vulnerable to attack). The leopard seal varies its diet with squid, fish, and the pups of other seals.

The northern and southern polar regions share the same hostile characteristic of intense cold. In almost every other way they are different. The Arctic is almost entirely frozen ocean surrounded, for the most part, by land. The Antarctic, on the other hand, is a land mass pressed down beneath a great raft of ice, a lost continent that at one time, before the continents drifted apart, was much warmer.

The common feature of both regions – heir coldness – stems from their positions where the Earth's axis passes through its surface. When one pole is tilted briefly for its summer toward the Sun, the other is tilted away into an endless night. They are cold because they receive their sunlight more obliquely than any other part of the world, for received heat is proportional to the angle at which the Sun's rays strike the surface. Finally the cold is intensified because the ice acts as a mirror that reflects solar energy back into space.

The contrast between the polar regions is most marked in the forms f life that each supports. The Arctic numbers among its inhabitants one of the largest and most powerful of predators, the polar bear (Thalarctos maritimus) (Fig 1). The Antarctic boasts as its only true terrestrial animals a handful (63 species) of insects, the largest of which is an unusual species of wingless mosquito.

The polar bear has adapted perfectly to its life in the Arctic, the frozen ocean. It is able to spend most of its life in water, insulated from the cold by thick, greasy fur. A solitary animal, the polar bear patrols the ice in search of prey, particularly the ringed seal (Pusa hispida) (Fig 1). When the seal's head appears through a breathing hole in the ice the bear stuns it with a single blow from its powerful front leg. During the harshest of the winter months pregnant female bears hole up in ice caves beneath the surface (Fig 2). The young are born in March or April, usually two at a time. The family leaves its den within the next two months – once the sun has become warm enough – and for the next two years the cubs learn how to hunt. The only mammal that tracks it closely is the Arctic fox (Alopex lagopus) (Fig 1). In lean times the fox will even live off the bear's droppings.

The sub-polar waters around the edges of the permanent Arctic ice are covered only by broken pack ice during the summer and these nutrient-rich waters support hosts of seals, including the ribbon seal (Histriophoca fasciata, the hooded seal (Cystophora cristata) (Fig 5), and the walrus (Odobenus romarus) (Fig 1).

One of the most fascinating creatures of the Arctic waters is the narwhal (Monodon monoceros), which has a long single tusk. The narwhal feeds mainly on squids and often uses its tusk as a sword in "fencing" matches with its fellows.

Considerable areas of North America and Eurasia fall within the Arctic Circle. These are the bleak, treeless tundra islands that support only grasses, mosses, and lichens. During the summer they are visited by wandering hers of caribou (the reindeer of Europe) and swarms of insects breed in the meltwater pools. The insects and the fresh, transient vegetation attract millions of migrant birds to feed, away from the crowded temperate regions. Of the 100 or more birds that breed in the tundra all but five or six are migrants.

Summer and winter, the great mass of the Antarctic is lifeless, containing as it does 90 percent of the world's ice. Only on its fringes is life to be found in the form of huge colonies of penguins and seals.

The four species of seal for whom Antarctic waters are home are the southernmost mammals in the world: the Weddell seal (Leptonychotes weddelli) (Fig7), the crabeater seal (Lobodon carcinophagus), the Ross seal (Ommatophoca rossi), and the leopard seal (Hydrurga leptonyx) (Fig 8).

Each has its own particular lifestyle; the Weddell seal always remains inshore while the others range far out to sea. The crabeater seal earns its name from its feeding habits; it gulps in large quantities of water and squirts this out through fan-like teeth that form a fine mesh at the gum margins, to sieve out the small crustaceans. The leopard seal is a vicious predator, cruising the edges of the ice pack in pursuit of its favorite dish, the Adélie penguin (Pygoscelis adelie). The leopard seal preys also on the pups of other seal species, on squids, and on fish.

The Adélie is the most common of the Antarctic penguins, of which there are five species; the largest is the emperor (Aptenodytes forsteri) (Fig 4), which stands about 1 m (39 in) high. Other birds are well represented, including the skua (Catharacta skua), which preys on penguin eggs and chicks. The skuas range in size from 44–56 cm (18–23 in).