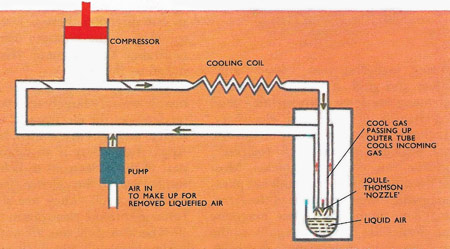 In the Linde process air is compressed and the heat of compression removed before the compressed air is passed through a nozzle. Joule-Thomson expansion takes place, cooling the air, which passes up the surrounding tube and back to the compressor to repeat the process. Eventually the air is liquefied and collected.

A gas molecule can never be seen, even under the most powerful microscope, but the scientist has developed a fairly clear picture of what it is like. He knows, for example, how the atoms that make up a molecule are bound together, and he also knows quite a lot about the internal structure of the individual atoms themselves. But of even greater practical importance is the behavior of large numbers of molecules or atoms when they come together to form a gas, liquid, or solid.

The physical properties of a substance are measured in the laboratory and from these measurements, physical laws are derived. These are macroscopic laws – they describe the properties of vast numbers of molecules or atoms in bulk. These laws are used by the scientist and engineer to help predict how the substance will behave under different conditions. They can also help confirm the scientist's theories of what processes take place on the microscopic scale. For example, the macroscopic properties of gases, the effects of changing temperature and pressure, can be studied in the laboratory and are described by the gas laws. These laws help the scientist confirm the theoretical, microscopic 'model' – the kinetic theory of gases.

According to the kinetic theory, the molecules in a gas are in constant motion, and the pressure exerted by the gas on the walls of the container is due to constant bombardment by atoms and molecules. From this theory the ordinary properties of the gases described by the gas laws can be predicted.

But there is one factor that is not taken into account in the simple kinetic theory. This is the forces of attraction existing between the gas molecules. This factor leads to inaccuracies in the gas laws, but by conducting experiments, the effects of the attraction between molecules in a gas may be studied. This was first done by James Joule and Lord Kelvin (William Thomson) in a famous demonstration which is now sometimes known as the porous plug experiment. A porous plug of absorbent cotton or silk was placed in a tube and a constant pressure difference between the two sides of the plug was established so that gas was forced through. On passing through the plug the gas expanded. The whole of the apparatus was very carefully lagged to ensure that no heat could enter or leave the tube. Such an expansion, with no heat transfer, is called an adiabatic expansion.

It was found, for most gases, that as a result of the expansion, the temperature of the gas was reduced. The explanation of the cooling is as follows. Energy is given to the gas molecules when they are compressed on the high pressure side of the plug, but they lose energy when the gas expands on the other side. The compression-expansion process can lead either to heating or cooling depending whether there is a net loss or gain in energy. In addition, energy is lost when the molecules overcome the inter-molecular forces of attraction. The drop in temperature (the Joule-Thomson effect) occurs there when there is a net loss of energy as a result of both processes.

After the original experiments, other workers repeated the experiments using more efficient porous plugs, made of earthenware and other materials. They confirmed Joule and Thomson's results, but also found that not all gases produced a cooling effect at all temperatures. Helium and hydrogen, for example, heated up when they expanded through the plug at ordinary temperatures, but cooled on expansion if they were first cooled below the inversion temperatures. This is because there is a net gain in energy at the higher temperatures (but not at lower temperatures) – the gain in energy on expanding through the plug exceeds the loss caused by expansion against intermolecular forces.