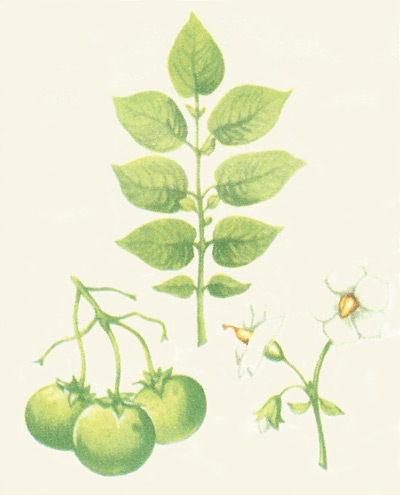 Fruit, leaves, and flowers of the potato.

The broken red line indicates the level of the soil. 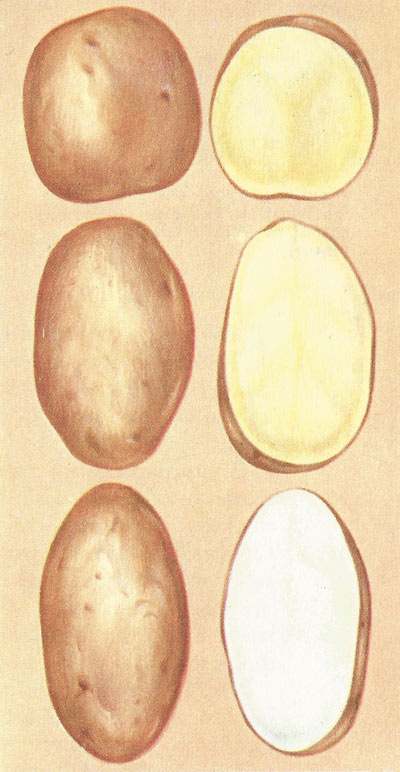 When the Spaniards invaded and conquered the Incas of Peru in the sixteenth century AD they found a complex civilization depending for its staple food on the potato. Study of the designs on the pottery of the early Incas, and of their predecessors the Chimu of the South American Andes, shows that potatoes were already being cultivated before 800 AD.

They were brought to Europe by the Spaniards and were being grown in several European countries before the end of the 16th century. In most countries they were not very popular for the next 200 years, except in Ireland, where the people quickly became almost entirely dependent on them for food. In 1846 this dependence on one crop led to disaster, for a disease attacked the potatoes and there was widespread famine. This caused terrible hardship and thousands of Irish emigrated, mainly to America.

Today the crop is protected against disease by spraying with chemicals and by growing hardy strains, and the potato is second only to wheat in importance as a starchy food.

The potato is a herbaceous plant that grows up to two feet in height. The flowers are white and the fruit is a green berry. The part of the plant below the soil consists of roots and underground stems, and it is the tuberous swellings on these stems which become the potato that we eat.

Two things remind us that the potato tuber is a stem and not a root: firstly it turns green when exposed to light; secondly, it has buds on it, which we call eyes.

It is from these eyes that new plants grow when the tubers are planted in the spring. They can be cut into pieces, each containing on eye, and each of these can produce a new plant. Normally, growers use the smaller tubers for planting.

Many varieties of potatoes have been produced by selection of plants grown from seed. Much has been done to select strains resistant to disease, suitable for various climates and for planting earlier or later in the season.

Different varieties also produce tubers of varying quality, from white floury potatoes to yellowish waxy ones. Majestic is a late potato with a white flesh and is very popular. Sharpe's Express is an early variety with yellow flesh, and Golden Wonder is a late yellow potato with a good flavor.

Potatoes are planted in Mar and Apr. Those planted too early risk being destroyed by frost, which withers and blackens the young foliage. They are ready for digging from July to October.

The tubers can be stored in the open in 'clamps' covered with earth, or in cellars, which must be dark and cold, otherwise the tubers will sprout or turn green. All the green parts of the plant are poisonous, due to a substance called solanine, and tubers which have turned green due to exposure to light are bitter.


composition of the potato

If we disregard variations shown by the different varieties we can say that the potato contains about one-fifth solid matter, the rest being water.

Of the solid matter by far the greatest part is starch, 80 to 88%, and there is about 3 to 8% of sugar. Nitrogenous constituents average about 3% of the dry weight and half of these are protein, half amino-acids. There is practically no fat or oil, Mineral constituents include phosphorus, calcium, potassium, and traces of iron, sodium, chlorine, and sulphur.

The potato is rich in ascorbic acid or vitamin C and also in vitamins of the B2 complex. Vitamins A and D are lacking.

Potatoes are used as food by people all over the world and are valuable as fodder for animals such as pigs and poultry. They are also an important source of industrial starch and of alcohol, which is obtained by fermenting the potatoes and distilling the resulting liquid to make vodka.