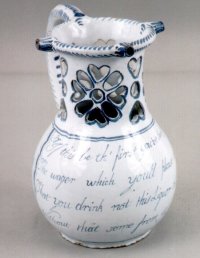 A puzzle jug is a practical joke in the form of a drinking vessel that, unless the trick is known, spills all over the user when he tries to take a sip. As the jug is tilted, liquid pours out from the pierced decoration surrounding the pot. The puzzle is to learn the secret of how to successfully drink without getting wet. Puzzle jugs have been manufactured in Germany, Holland, France, and several other European countries since the end of the thirteenth century. The Exeter Puzzle Jug, on display in the Royal Albert Museum in Exeter, Devon, was probably made in the Saintonge region of western France, around 1300, and is one of the finest examples of medieval pottery imported to England. Puzzle jugs came back into vogue in the eighteenth and nineteenth centuries and are still manufactured by ceramicists in France, Germany and Britain. And the secret? That is really quite open, and can be handled by anyone prepared to get to the bottom of it.