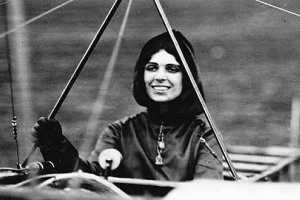 Harriet Quimby was an American aviator who became the first female pilot to fly across the English Channel. Although she was the first American woman to become a licensed pilot, her career as a pilot lasted a mere 11 months. On April 16, 1912, she left England in a 50-hp monoplane lent to her by Louis Blériot, heading for France in a plane she had never flown before and with a compass she had just learned how to use. Despite poor visibility and fog, Quimby landed 59 min later near Hardelot. Upon landing, she was greeted by the local residents, but the sinking of the Titanic just days earlier limited reporting of her achievement in the world's press. She died the same year, on July 1, 1912, when she lost control of her plane at a flying exhibition near Quincy, Massachusetts.