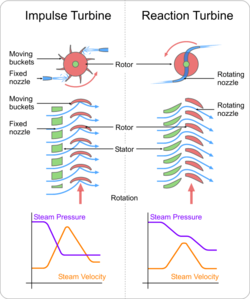 A reaction turbine is a type of turbine that develops torque by reacting to the pressure or weight of a fluid. The operation of reaction turbines is described by Newton's third law of motion (action and reaction are equal and opposite).

In a reaction turbine, unlike in an impulse turbine, the nozzles that discharge the working fluid are attached to the rotor. The acceleration of the fluid leaving the nozzles produces a reaction force on the pipes, causing the rotor to move in the opposite direction to that of the fluid. The pressure of the fluid changes as it passes through the rotor blades. In most cases, a pressure casement is needed to contain the working fluid as it acts on the turbine; in the case of water turbines, the casing also maintains the suction imparted by the draft tube. Alternatively, where a casing is absent, the turbine must be fully immersed in the fluid flow as in the case of wind turbines. Francis turbines and most steam turbines use the reaction turbine concept.

A propeller turbine generally has a runner with three to six blades in which the water contacts all of the blades constantly. Picture a boat propeller running in a pipe. Through the pipe, the pressure is constant; if it isn't, the runner would be out of balance. The pitch of the blades may be fixed or adjustable. The major components besides the runner are a scroll case, wicket gates, and a draft tube. There are several different types of propeller turbines:

The turbine and generator are a sealed unit placed directly in the water stream.

The generator is attached directly to the perimeter of the turbine.
1.3. Tube turbine The penstock bends just before or after the runner, allowing a straight line connection to the generator.
1.4. Kaplan

Both the blades and the wicket gates are adjustable, allowing for a wider range of operation.

A Francis turbine has a runner with fixed buckets (vanes), usually nine or more. Water is introduced just above the runner and all around it and then falls through, causing it to spin. Besides the runner, the other major components are the scroll case, wicket gates, and draft tube.

Kinetic energy turbines, also called free-flow turbines, generate electricity from the kinetic energy present in flowing water rather than the potential energy from the head. The systems may operate in rivers, man-made channels, tidal waters, or ocean currents. Kinetic systems utilize the water stream's natural pathway. They do not require the diversion of water through man-made channels, riverbeds, or pipes, although they might have applications in such conduits. Kinetic systems do not require large civil works; however, they can use existing structures such as bridges, tailraces and channels.