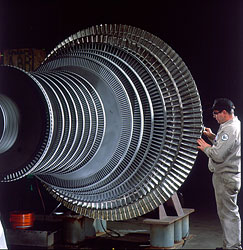 A steam turbine is a device that converts high-pressure steam, produced in a boiler, into mechanical energy that can then be used to produce electricity by forcing blades in a cylinder to rotate and turn a generator shaft. Steam turbine power plants operate on a Rankine cycle.

The steam is created by a boiler, where pure water passes through a series of tubes to capture heat from the firebox and then boils under high pressure to become superheated steam. The heat in the firebox is normally provided by burning fossil fuel (e.g. coal, fuel oil, or natural gas). However, the heat can also be provided by biomass, solar energy, or nuclear fuel. The superheated steam leaving the boiler then enters the steam turbine throttle, where it powers the turbine and connected generator to make electricity. After the steam expands through the turbine, it exits the back end of the turbine, where it is cooled and condensed back to water in the surface condenser. This condensate is then returned to the boiler through high-pressure feedpumps for reuse. Heat from the condensing steam is normally rejected from the condenser to a body of water, such as a river or cooling tower.

Steam turbine plants generally have a history of achieving up to 95% availability and can operate for more than a year between shutdowns for maintenance and inspections. Their unplanned or forced outage rates are typically less than 2% or less than one week per year.

Modern large steam turbine plants (over 500 MW) have efficiencies approaching 40-45%. These plants have installed costs between $800 and $2,000/kW, depending on environmental permitting requirements.