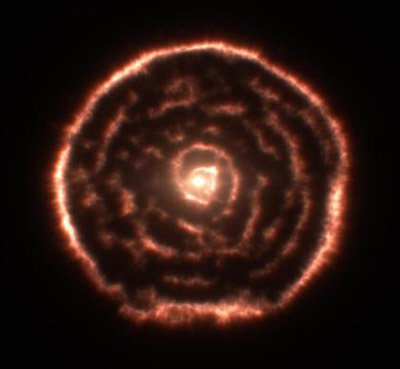 Observations using the Atacama Large Millimeter/submillimeter Array (ALMA) have revealed an spiral structure in the material around R Sculptoris. This feature has never been seen before and is probably caused by a hidden companion star orbiting the star. This slice through the new ALMA data reveals the shell around the star, which shows up as the outer circular ring, as well as a very clear spiral structure in the inner material. Credit: ALMA (ESO/NAOJ/NRAO). 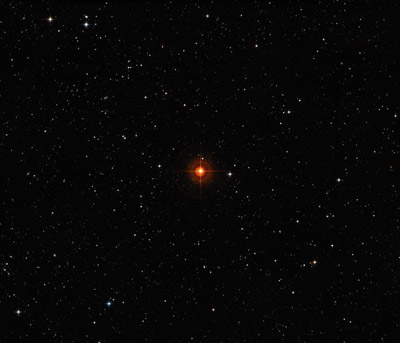 R Sculptoris (R Scl) is a large, cool, highly-evolved star of a type known as an asymptotic giant branch star. R Sculptoris lies about 1,550 light-years away in the constellation Sculptor. Like all stars in its advanced stage of evolution, R Scl is losing mass into the surrounding space through a combination of a continuous, strong stellar wind and intermittent "thermal pulses" which happen roughly every 10,000 to 50,000 years. These thermal pulses result in the ejection of shells of circumstellar gas and dust. The dust grains in the shells glow brightly at wavelengths from the far infrared to the millimeter parts of the electromagnetic spectrum. Data collected on R Scl show that the star underwent a thermal event about 1,800 years which lasted about 200 years. In the top image shown here, the shell of material from this latest outburst appears as the bright outer ring.

Observations by the Atacama Large Millimeter/submillimeter Array (ALMA) in 2012 also revealed a spiral structure within the shell – a combination of features never before seen. By running computer simulations, researchers have shown that spiral of material almost certainly results from the presence of a small, unseen companion star which has drawn out the gas and dust shed by R Scl into the unusual formation seen. Calculations suggest that the separation between the two stars is about 60 astronomical units (i.e., 60 times the average distance between the Earth and the Sun), and that the stars orbit around their common center of gravity every 350 years. Their total mass appears to be about two solar masses.