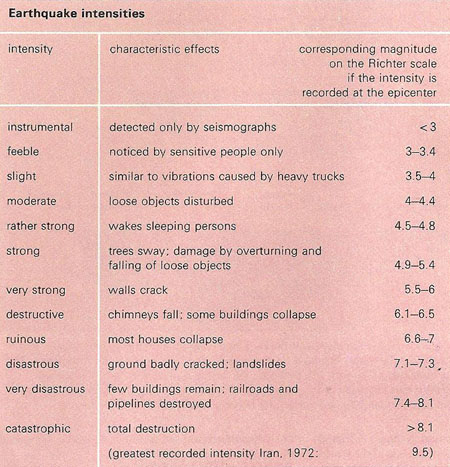 The Richter scale, being of empirical numerical origin, does not directly reflect any subjective scale of earthquake intensities. In this table, an attempt is made to correlate a subjective scale with corresponding Richter magnitudes, imagining the observer to be near the epicenter of the earthquake.

The Richter scale is a scale devised by US geologist Charles F. Richter (1900–1985), which is used to measure the magnitudes of earthquakes in terms of the amplitude and frequency of the surface waves. The scale runs from 0 to 10, and is logarithmic – each point on the scale increases by a factor of ten. About one quake a year registers over 8.

Another scale used to measure earthquakes is the modified Mercalli scale, which is a scale of 12 points used for measuring earthquakes intensity. Named after the Italian seismologist Giuseppe Mercalli (1850–1914), it is based on damage done at any point and so varies from place to place.