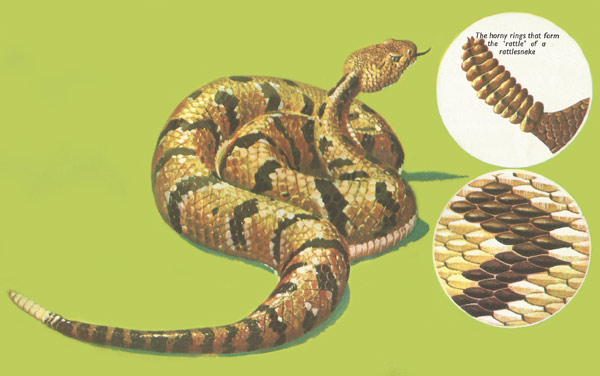 Rattlesnakes belong to the group of snakes known as vipers, and are confined to America.  At the end of the tail of a rattlesnake there is a curious apparatus consisting of a series of horny rings, loosely attached to each other, so that when the snake vibrates its tail they make a loud buzzing noise. Every time the snake sheds its skin, one ring is added to the rattle. The number of rings, however, is not an indication of the snake’s age, as it sheds its skin two or three times a year, and after a time the end-most rings fall off. Over 20 rings have been recorded but 8 to12 is the usual number.

The rattlesnake buzzes with its tail for exactly the same reason that the cobra spreads its hood – to warn its enemies to keep away.

All vipers, including rattlesnakes and adders, have very long poison fangs which move forward and back as the mouth opens and shuts.  Thus the fangs are erected when the snake opens its mouth, but lie back in the mouth when it is closed.