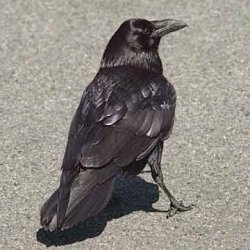 The raven paradox is a paradox proposed by the German logician Carl Hempel (1905–1997) in the 1940s to illustrate a problem where the logic of induction seems to fly in the face of intuition. When many people over thousands of years observe something like the law of gravity, we tend to believe that it is true with very high probability. This type of reasoning can be summarized by the principle of induction: If an instance X is observed that is consistent with theory T, then the probability that T is true increases. Hempel gives an example of the principle of induction. The theory is that all ravens are black. We go out and examine a million ravens, and observe that they are all black. After each observation, our belief in the theory "all ravens are black" increases. Now comes the problem. The statement "all ravens are black" is logically equivalent to the statement "all non-black-things are non-ravens." If we observe a red apple, that is consistent with that statement. A red apple is a non-black-thing, and when we examine it, we observe that it is a non-raven. So by the principle of induction, observing a red apple should increase our belief that all ravens are black! This problem has been humorously summarized as:

I never saw a purple cow
But if I were to see one
Would the probability ravens are black
Have a better chance to be one?

Philosophers have offered many solutions to this violation of intuition. The American logician Nelson Goodman (1906–1998) suggested adding restrictions to our reasoning, such as never considering an instance as support for "All P are Q" if it would also support "No P are Q." Other philosophers have questioned the principle of equivalence. Perhaps the red apple should increase our belief in the theory "all non-black-things are non-ravens," without increasing our belief that "all ravens are black." That suggestion has been questioned, though, on the grounds that you can't have a different degree of belief in two different statements, if you know they are either both true or both false. Some philosophers have argued that it's only our intuition that is flawed. Observing a red apple really does increase the probability that all ravens are black! After all, if someone gave you all the non-black things in the universe, and you noticed that there were no ravens in the collection, then you could indeed conclude that all ravens are black. The example only seems counterintuitive because the set of non-black-things is vastly larger than the set of ravens. Thus observing one more non-black-thing which is not a raven should make a tiny difference to our degree of belief in the proposition compared to the difference made by observing one more raven which is black.

If, as an alternative to the principle of induction described above, Bayes' theorem is used instead, then the paradox doesn't arise. According to Bayes's theorem the probability of a hypothesis H must be multiplied by the following ratio:

If you ask someone to select an apple at random and show it to you, then the probability of seeing a red apple is independent of the colors of ravens. The numerator will equal the denominator, the ratio will equal one, and the probability will remain unchanged. Seeing a red apple won't affect your belief about whether all ravens are black. If you ask someone to select a non-black-thing at random, and they show you a red apple, then the numerator will exceed the denominator by an extremely small amount. Seeing the red apple will only slightly increase your belief that all ravens are black. You'll have to see almost every non-black-thing in the universe (and see they're all non-ravens) before your belief in "all ravens are black" increases appreciably. In both cases, the result agrees with intuition.