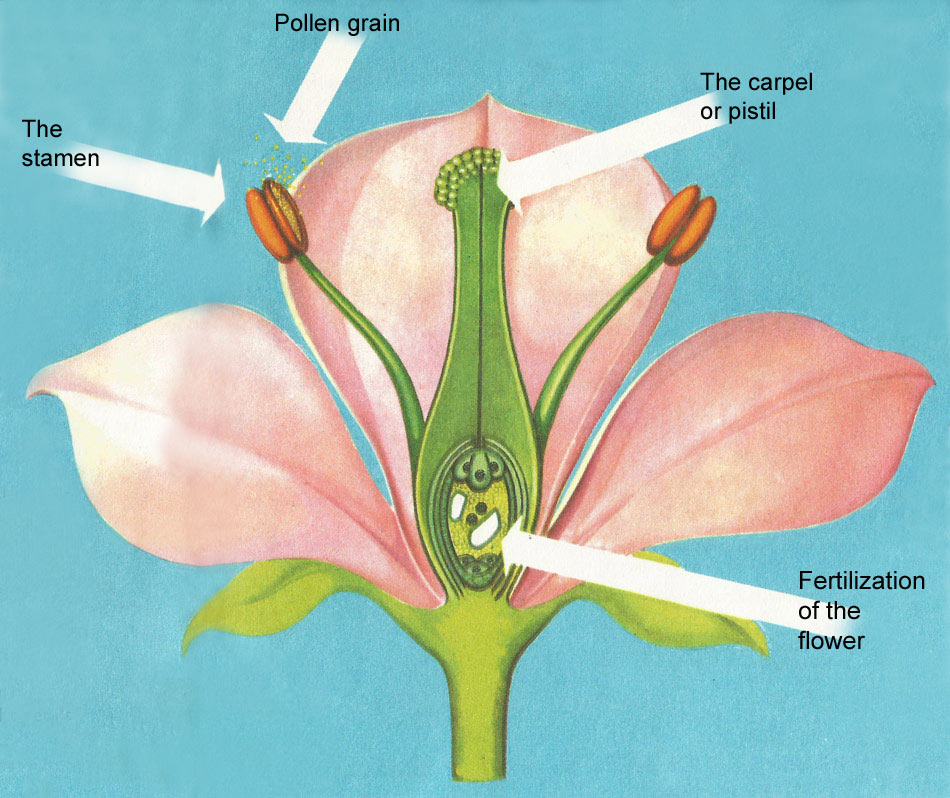 Fertilization of a flowering plant. 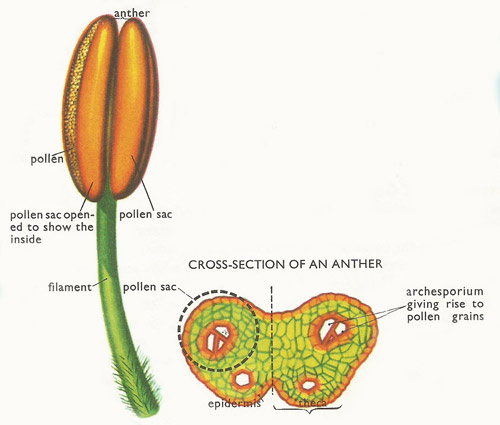 The stamen consists of a slender stalk, called the filament, bearing at its tip the anther. 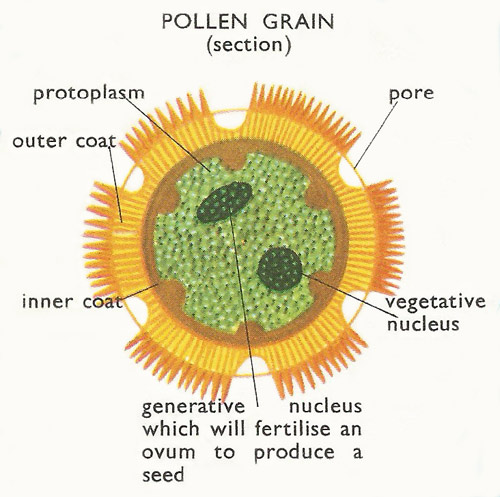 Section through a pollen grain. 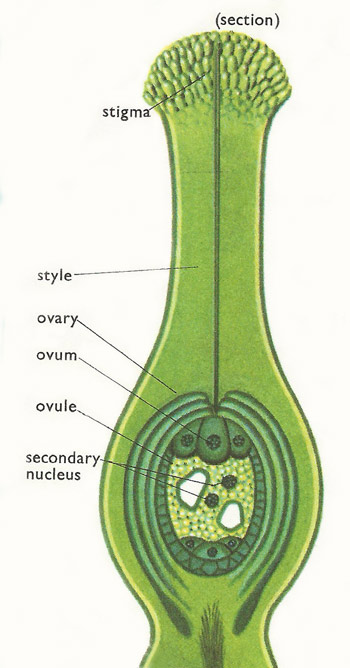 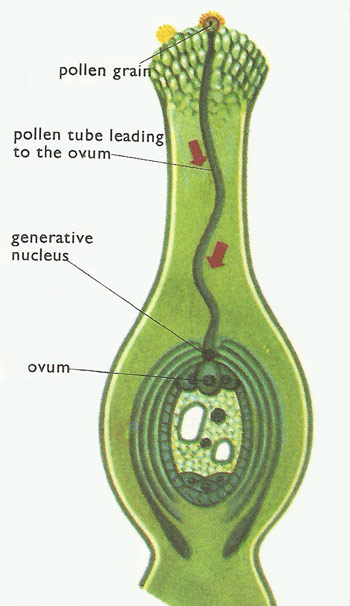 Fertilization of a flower. 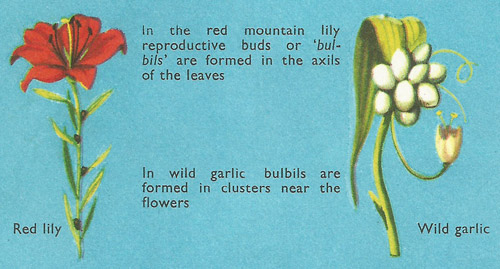 These bulbils fall off the plant on to the ground, where they root themselves and grow into new plants.

The growth of new plants from seed is a process familiar to everyone, and it is well known that a sort of fertilization is involved and that this is how new plants are formed.

In the so-called lower plants, such as algae, mosses, and ferns, the details of the reproductive process vary considerably. In some algae and fungi a joining together or conjugation may take place between cells apparently of the same kind (that is, not differentiated into male and female). In mosses and ferns a definite sexual process is involved, which occurs, in the life history of the plant, alternately with the production of minute bodies called spores; these are dispersed by the wind and then germinate to form a new plant, rather as seeds do.

Although flowering plants vary greatly (think of the contrast between a violet and an oak-tree), the details of the sexual reproductive process are much the same in all of them.

When we grow new plants from cuttings or from tubers (like potatoes) no sexual process is involved, and this type of reproduction is called vegetative or asexual. In some plants it occurs naturally, by the growth of buds, which become detached from the parent plant and grow into new ones.

The flower is the part of the plant concerned with sexual reproduction. In a typical flower both male and female elements are present. The former are the familiar grains of pollen; the female part consists of an egg, or ovum, contained in an ovary. The structure bearing the pollen is called the stamen, and that which contains the ovary is the carpel.

Fertilization is brought about by the carrying) preferably between different flowers) of pollen to the tip of the carpel. In some plants this is done by the wind, but in those plants with conspicuous flowers pollen is carried by insects. The bright petals and sweet scent of these flowers, and their store of nectar, are all devices to attract insects and so insure fertilization.

When both stamens and carpels are present in the same flower, it is said to be bisexual or hermaphrodite. If the flower has either stamens or carpels, but not both it is called unisexual. The peach is an example of a bisexual flower, the marrow of a unisexual one.

The stamen consists of a slender stalk, called the filament, bearing at its tip the anther. The latter is usually formed of two lobes, or thecae, each of which is made up of a pair of pollen sacs.

When the pollen is ripe the pollen sacs open and the tiny grains are blown away or carried away by insects.

This is formed of three parts:

• The stigma at the tip, which receives the grains of pollen. In order to keep the pollen grains on the stamen, it is usually sticky or hairy.

• The style, which connects the stigma with the ovary below.

• The ovary, containing the ovule, which will develop into a seed after fertilization. The ovule, is a rather complicated structure; its most important features are:

• The egg or ovum, which will develop into an embryo when fertilized by the generative nucleus of the pollen grain.

• The two secondary nuclei; these fuse together and, after fertilization, develop into a tissue called the endosperm, which surrounds and nourishes the embryo.

The term pistil is also applied to the structure formed when several carpels are fused together.


Fertilization of the flower

When both stamens and carpels are present in the same flower, it is said to be bisexual or hermaphrodite. If the flower has either stamens or carpels, but not both, it is called unisexual. The peach is an example of a bisexual flower, the marrow of a unisexual one. Plants that bear only male or only female flowers are called dioecious; if both male and female flowers are present, the plant is monoecious.