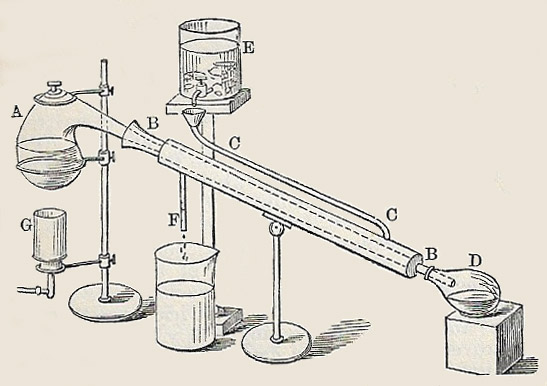 Retort fitted with Liebig condenser. A, bulb of the retort, into which the liquid to be distilled is put; D, the receiver, into which the end of the retort is placed; BB, the condenser, receiving a supply of cold water from E by means of the pipe C, the heated water escaping at F; G, the heating apparatus, a Bunsen burner in this case.

A retort is a closed laboratory vessel with an outlet tube, used for distillation, sublimation, or decomposition by heat. It made be made of glass, earthenware, or metal, according to the purposes for which it is to be used. Glass retorts are the most common, as shown in the diagram. They may be used in the preparation of products that don't require much cooling for the condensation of their vapor – for example, for the production of hydrocyanic acid or nitric acid. The globular vessel in which the neck of the retort is inserted is called the receiver. The neck of the vessel may be cooled in various ways, for instance by the application of a cold, damp cloth, by a current of water, or by a special apparatus known as a Liebig condenser.