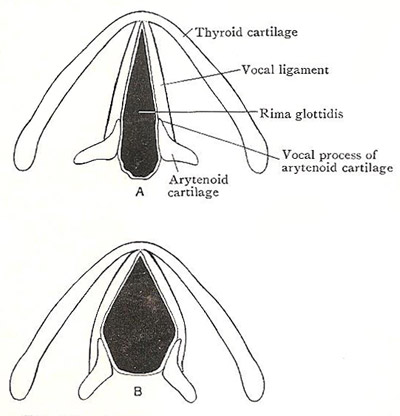 Rima glottidis. A. During ordinary breathing. B. Widely open.

The form of the rima glottidis undergoes frequent alterations depending on what the individual is doing. During ordinary quiet breathing it is lanceolate in outline, and the part between the folds has the form of an elongated triangle with the base directed backward. When the rima glottidis is widely opened its broadest part is between the extremities of the vocal process. The two vocal folds may, on the other hand, be approximated so closely to each other, as when a high note is sung, that the part between the folds is reduced to a chink. The length of the entire fissure is about 2.5 cm (1 in) in men and 1.7 cm (0.7 in) in women.