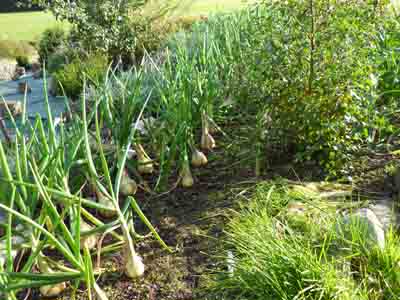 Onions growing in compost mineralized with basaltic rock dust at the SEER Centre in Perthshire, Scotland.

Soil mineralization is the creation of a more fertile soil by reintroducing a rich variety of minerals to the soil as happens naturally during, for example, Ice Ages and volcanic eruptions. Soil remineralization is distinct from conventional chemical fertilization, which involves the manufacture and spreading of manufactured materials typically high in nitrogen, phosphorus, and potassium ("NPK") together with secondary minerals (calcium, sulfur, and magnesium).

Not all the claims of soil remineralization advocates have yet been accepted by the scientific community and it remains a controversial subject; however, the potential benefits of this natural means of replenishing soil fertility, including greatly improved agricultural productivity and carbon sequestration, suggest that much more research is warranted.


How the idea of soil remineralization came about

The earliest pioneer of soil remineralization was the German nutritionist Julius Hensel. Working as a miller in the latter part of the 19th century he discovered that sprinkling some of the ground bits of rock, which resulted from the grinding of grain, onto the soil of his garden had a marked effect and the health and productivity of apple trees. He then experimented further with what he called steinmehl (stone meal), now also known as rock dust or rock powder, and found multiple benefits from its use. These included vegetable products with greater yield, bulk, and nutritional content, better taste, and greater resistance to insects, plant diseases, drought, and frost. Moreover, he found that treated soil kept its improved state over long periods because the steinmehl, being fairly insoluble, did not leach out in the same way that commercial applications did. Animals and people who ate the steinmehl-grown produce appeared to enjoy improved health.

Hensel's discovery proved enormously popular, especially in the region where he lived. An exhibition of vegetables, fruit, and crops grown in steinmehl-enriched soil was held in Leipzig in 1892, the year that Hensel's book Bread from Stones was published. Unfortunately, a couple of factors blocked further expansion of interest and application in remineralization at this time. The first was a practical matter: Hensel simply couldn't make enough steinmehl with the technology to hand. To be effective, the stone meal has to be in the form of a very fine dust, thus enabling a very large surface area over which the minerals in the rock particles can enter the soil and, eventually, the plant's roots. Hensel simply couldn't produce such fine dust on a large scale. The second roadblock to remineralization was orthodox science. In the 1830s, the great German chemist Justus von Liebig (known as the "father of the fertilizer industry") popularized a principle first stated by Carl Sprengel in 1828 called the "law of the minimum," according to which plant or crop growth is limited by the scarcest nutrient available. It followed from this that whichever elements, important to growth, were in shortest supply should be added to the soil. Nitrogen (N), phosphorus (P), and potassium (K) were considered to be the elements needed in the greatest amounts and so the notion of PKN fertilization, which is still with us today, took hold.

Writing a half a century later, Hensel disputed von Liebig's conclusions. Hensel argued that von Liebig had grossly exaggerated the phosphorus and potassium needs of plants, and that the natural chemistry of healthy plants in fully remineralized soil was far more capable of utilizing atmospheric nitrogen than von Liebig had understood. Hensel further asserted that NPK fertilization "forced" growth, temporarily resulting in larger plants and greater yield, but also creating a weaker quality of plant and long-term soil depletion.

Hensel and others who have followed his tradition have also pointed out that there was no understanding of the vital role of trace elements in von Liebig's time. And, indeed, as scientific methods have grown more sophisticated, the number of elements believed to be essential to plant health and growth has steadily risen.

Today rock dust is various forms and from a number of suppliers around the world, having seen a renaissance in Europe in the 1970s.

A second strand in the story of soil remineralization involves the subject of agrogeology, or geology as applied to agriculture. From the middle of the twentieth century, research in this field was carried out by Ward Chesworth, William Fife, and others in Canada, Brazil, Tanzania, West Africa, and the Canary Islands. Especially in tropical regions, heavy rainfall washes out conventional NPK fertilizers very quickly, especially from laterite-type soils, posing a risk to groundwater. Rock fertilizers, it has been found, not only supply nutrients to the laterite but also help form clay minerals with which plant roots can more easily exchange nutrient ions. The book Rocks of Crops by Peter von Straaten, of the University of Guelph, is a good modern introduction to this subject.


The fate of the planet

Soil remineralization is also at the heart of a grassroots movement which goes beyond restoring soil fertility to helping reverse climate change by removing excess carbon dioxide from the atmosphere. This movement, which began in the 1970s, takes its focus from the theories of John Hamaker and Don Weaver as presented in their book The Survival of Civilization. Hamaker and Weaver note that soils, worldwide, are replenished with nutrients by glacial and volcanic activity during ice ages, and gradually depleted in nutrients during inter-glacials. We are presently coming towards the end of an inter-glacial and, thanks to a rapidly growing population, depleting soils at a faster rate than ever before and causing a massive buildup of carbon dioxide. Hamaker, Weaver, and their supporters, argue that the key to reversing these trends, and essentially restoring the soil to its rich condition at the start of an inter-glacial, is to remineralize soils on a global basis. This remineralization, say Hamaker and Weaver, is best achieved using rock gravels and moraine from glacial deposits as these provide the most natural mixtures of rocks with the broadest possible spectrum of minerals and trace elements.