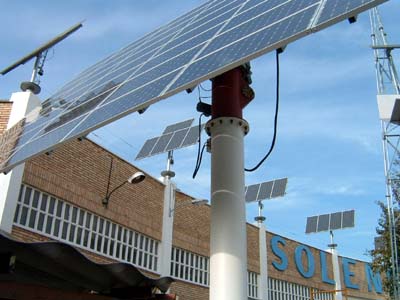 A solar tracker is a device that keeps an array of solar modules (solar panels) or a concentrating collector facing toward the sun. The use of a tracker ensures that the amount of sunlight falling directly onto the modules throughout the day, and hence the amount of electricity produced, is much greater than in the case of a static set-up. Solar trackers can boost the power output of an array by 30 to 50%. Their cost is relatively low compared to that of the solar modules themselves, and can, in any case, be recouped quite quickly through the extra electricity generated.

The two basic types of solar tracker are single-axis and double-axis. A single-axis tracker can only pivot in one plane – either horizontally or vertically. This makes it less complicated and generally cheaper than a two-axis tracker, but also less effective at harvesting the total solar energy available at a site.

A horizontal-axis tracker consists of a long horizontal tube to which solar modules are attached. The tube is aligned in a north-south direction, is supported on bearings mounted on pylons or frames, and rotates slowly on its axis to follow the sun's motion across the sky. This kind of tracker is most effective at equatorial latitudes where the sun is more or less overhead at noon. In general, it is effective wherever the solar path is high in the sky for substantial parts of the year, but, for this very reason, does not perform well at higher latitudes.

For higher latitude, a vertical-axis tracker is better suited. This works well wherever the sun is typically lower in the sky and, at least in the summer months, the days are long.

Double-axis solar trackers, as the same suggest, can both simultaneously in horizontal and vertical directions, and so are able to point exactly at the sun at all times in any location. They use they same principle as the mountings of astronomical telescopes; consequently there is no shortage of software to run on the computers that control movement of such devices.