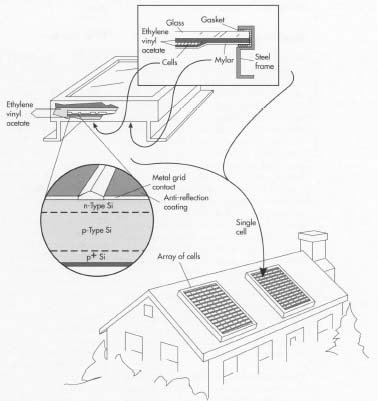 A solar module, also called a solar panel or photovoltaic (PV) module, is an integrated assembly of interconnected solar cells designed to deliver a selected level of working voltage and current at its output terminals, and suited for incorporation in a solar power system. In addition to the cells, a typical solar module includes the following components:

Solar modules are normally mounted on top of a roof as part of a roof-mounted solar power system, or a holding rack of some sort, within a frame structure. A solar module is the smallest building block of the power generating part of a solar array.


How a solar module is made

Solar cells are connected together by electrical contacts that are very thin (at least in the front) so as not to block sunlight to the cell. Metals such as palladium/silver, nickel, or copper are vacuum-evaporated through a photoresist, silkscreened, or merely deposited on the exposed portion of cells that have been partially covered with wax. All three methods involve a system in which the part of the cell on which a contact is not desired is protected, while the rest of the cell is exposed to the metal.

Because pure silicon is shiny, it can reflect up to 35 percent of sunlight that falls on it. To reduce the amount of sunlight lost, an anti-reflective coating is put on the silicon wafer. The most commonly used coatings are titanium dioxide and silicon oxide, though others are used. The material used for coating is either heated until its molecules boil off and travel to the silicon and condense, or the material undergoes sputtering. In this process, a high voltage knocks molecules off the material and deposits them onto the silicon at the opposite electrode. Yet another method is to allow the silicon itself to react with oxygen- or nitrogen-containing gases to form silicon dioxide or silicon nitride. Commercial solar cell manufacturers use silicon nitride.

Solar modules can be used singly or interconnected in solar arrays for a variety of applications, from charging batteries and driving motors to powering entire communities. Sample configurations and uses (courtesy of GE Power website) include:

The performance of solar modules is measured by several factors, including: