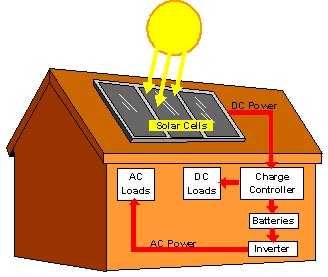 Figure 2. How solar power is harnessed.

A solar power system is a system used to transform solar radiation directly into electricity. At the heart of a solar power system, also known as a photovoltaic (PV) system or solar electric system, are solar cells, which are interconnected to form solar modules (solar panels) and solar arrays.

The size and configuration of a system depend on its intended task. Modules and arrays can be used to charge batteries, operate motors, and to power any number of electrical loads. With the appropriate power conversion equipment, solar power systems can produce alternating current (AC) compatible with any conventional appliances, and can operate in parallel with, and interconnected to, the utility grid (see grid-connected system).

Among the components of a complete solar power system may be a DC-AC power inverter, a battery bank, a system and battery controller, auxiliary energy sources, and sometimes the specified electrical load (appliances). In addition, an assortment of balance of system (BOS) hardware, including wiring, overcurrent, surge protection and disconnect devices, and other power processing equipment.

The two main types of solar power systems are stand-alone systems and grid-connected or utility-interactive systems.

These are designed to operate independent of the electric utility grid, and are generally designed and sized to supply certain DC and/or AC electrical loads. They may be powered by a solar array only, or may use wind, an engine-generator, or utility power as an auxiliary power source in what is called a solar-hybrid system.

The simplest type of stand-alone system is a direct-coupled system, where the DC output of a solar module or array is directly connected to a DC load (Figure 3).

Since there is no electrical energy storage (batteries) in direct-coupled systems, the load only operates during sunlight hours, making these designs suitable for common applications such as ventilation fans, water pumps, and small circulation pumps for solar thermal water heating systems. Matching the impedance of the electrical load to the maximum power output of the PV array is a critical part of designing well-performing direct-coupled system. For certain loads such as positive-displacement water pumps, a type of electronic DC-DC converter, called a maximum power point tracker (MPPT), is used between the array and load to help better utilize the available array maximum power output.

In many stand-alone solar power systems, batteries are used for energy storage. The following diagram is of a typical stand-alone system powering DC and AC loads (Figure 4).

This is how a typical solar hybrid system might be configured (Figure 5).

Solar power systems are able to operate normally in grid-connected mode and still operate critical loads when utility service is disrupted, providing that battery storage is used. This type of system is popular for homeowners and small businesses where a critical backup power supply is required for critical loads such as refrigeration, water pumps, lighting, and other necessities. Under normal circumstances, the system operates in grid-connected mode, serving the on-site loads or sending excess power back onto the grid while keeping the battery fully charged. In the event the grid becomes de-energized, control circuitry in the inverter opens the connection with the utility through a bus transfer mechanism, and operates the inverter from the battery to supply power to the dedicated loads only. In this configuration, the critical loads must be supplied from a dedicated sub panel. The diagram below shows how a solar power system might be configured to operate normally in grid-connected mode and also power critical loads from a battery bank when the grid is de-energized.