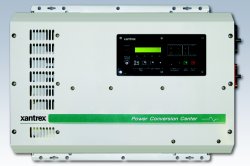 A stand-alone inverter is an electrical inverter that converts DC power stored in batteries to AC power that can be used as needed. Selecting an inverter for your power system based on the maximum load you will be powering, the maximum surge required, output voltage required, input battery voltage and optional features needed. High quality stand-alone inverters are available in sizes from 100 watts, for powering notebook computers and fax machines from your car, to 8000 watts, for powering an entire house or small commercial operation. The size of an inverter is measured by its maximum continuous output in watts. This rating must be larger than the total wattage of all of the AC loads you plan to run at one time. The size of the inverter can be minimized if the number and size of the AC loads is kept under control. Wattage of most AC loads can be determined from a tag or label on the appliance, usually located near where the power cord enters, or from the owner's manual. If the inverter is expected to run induction motors, like the ones found in automatic washers, dryers, dishwashers and large power tools, it must be designed to surge, or deliver power many times its rating for short periods of time while these motors start.

Square wave inverters have the lowest cost and efficiency. Modified square wave output are an economical choice in power systems where waveform is not critical. Their high surge capacity allows them to start large motors while their high efficiency makes them economical with power when running small loads like a stereo or a small light. They can power most lighting, televisions, appliances and computers very well. However, this type of inverter may destroy some low cost rechargeable tools and flashlights, and their waveform will not allow many laser printers, copiers, light dimmers, and some variable speed tools to operate. Some audio equipment will have a background buzz that may be annoying to music connoisseurs.

Sine wave inverters have a slightly higher cost, but they can operate almost anything that can be operated on utility power. They range in size from 150 watts for small applications to 200,000 watts that can run a small village.