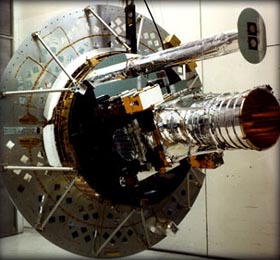 SME (Solar Mesosphere Explorer) was a NASA scientific satellite designed to investigate the processes that create and destroy ozone in Earth's upper atmosphere.

The mission's specific goals were to examine the effects of changes in the solar ultraviolet flux on ozone densities in the mesosphere; the relationship between solar flux, ozone, and the temperature of the upper stratosphere and mesosphere; the relationship between ozone and water vapor; and the relationship between nitrogen dioxide and ozone. The mission was managed for NASA by JPL (Jet Propulsion Laboratory) and operated by the Laboratory for Atmospheric and Space Physics of the University of Colorado via the Goddard Space Flight Center. The scientific payload included an ultraviolet ozone spectrometer, a 1.27-micron spectrometer, a nitrogen dioxide spectrometer, a 4-channel infrared radiometer, a solar ultraviolet monitor, and a solar proton alarm detector. All instruments were turned off in December 1988 and contact was lost permanently on 14 April 1989, following a battery failure.