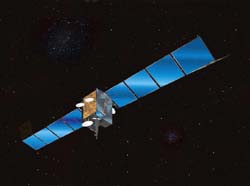 With the launch of Skynet 1A in 1969, Britain became the third entity after the United States and Intelsat to orbit a geostationary satellite. Skynet 1B, launched in August 1970, was stranded in a transfer orbit when its apogee kick motor failed to fire. Then Skynet 1A failed prematurely, and it was not until 1974 that the first Skynet 2 was launched. Unfortunately this too was stranded in a useless orbit. Skynet 2B, however, was successfully placed in an orbit over the Indian Ocean at 42° E and, remarkably, was still working 20 years later. Skynet 3 was never developed, and the next launch was the first of the Skynet 4 series in 1988. Skynet 4, with an on-orbit mass of 800 kg, has one experimental EHF (extremely high frequency) channel, two UHF (ultrahigh frequency), and four X-band channels. The fifth and last Skynet 4, and a replacement for Skynet 4C was launched by an Ariane on 26 February 1999. The first satellite in the Skynet 5 series was launched atop an Ariane 5-ECA rocket on 11 March 2007.