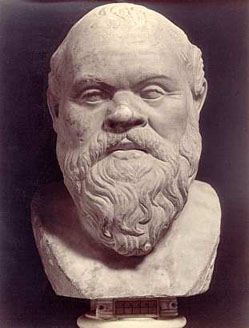 Socrates was a Greek philosopher and mentor of Plato. Socrates wrote nothing, but much of his life and thought is vividly recorded in the Dialogues of Plato. The exact extent of Plato's indebtedness to Socrates is uncertain – for example, it is still disputed whether the doctrine of the Forms (see realism and universals) is Socratic or Platonic; but Socrates made at least two fundamental contributions to Western philosophy: by shifting the focus of Greek philosophy from cosmology to ethics; and by developing the "Socratic method" of enquiry. He argued that the good life is the life illuminated by reason and strove to clarify the ideas of his interlocutors by leading them to detect the inconsistencies of their beliefs. His passion for self-consistency was evident even in his death: ultimately condemned for "impiety," he decided to accept the lawful sentence – and so remain true to his principles – rather than make good an easy escape.

Socrates was born in Athens, the son of Sophroniscus, a sculptor or stone-mason, and Phaenarete, a midwife. Nothing is known of his early life but by the time he was middle-aged he was a well-known figure in the city, where his odd looks and odd behavior made him conspicuous. He was an ugly man, with a snub nose and protruding eyes; but he had extraordinary powers of self-control and physical endurance.

Socrates enjoyed spending his time in conversation about philosophical questions with anyone who was willing to talk to him. By doing this he believed himself to be fulfilling a mission. One of his admirers once asked the Delphic oracle whether anyone was wiser than Socrates and brought back the answer that no one was wiser. Socrates, who was essentially humble, set out to prove the oracle wrong by finding someone wiser than himself, but after talking to all sorts of people he came to the conclusion that the oracle was right, because, although he was as ignorant as other men, he was at least aware of his own ignorance and they were not.

Before Socrates' time, philosophy was mainly concerned with such questions as how the world came into existence and of what it is made. Socrates became convinced that it was impossible to answer these questions, and that in any case the study of them threw no light on the right way to live, which to him was the only subject of real importance. His aim therefore was to get people to think clearly about the real nature of qualities such as justice and courage instead of merely guiding their lives by conventional notions. He did not claim to teach anything, only to ask questions that would help people to think things out for themselves.

Socrates believed that all wrong-doing is due to ignorance, and that if people only knew what was right they would have no difficulty in doing it. This is the meaning of the celebrated sayings attributed to him that "Virtue is knowledge" and that "No one does wrong willingly". A third saying which can be safely ascribed to him is that "It is better to suffer wrong than to do wrong". This was a most astonishing statement to the Athenians of the fifth century BC. In fact the great importance of Socrates in history is that he introduced into European thought the idea that the supreme object of a man's life ought to be to "make his soul as good as possible", and that he did not hesitate to sacrifice his life rather than abandon his principles.

Our knowledge of his conversational methods is chiefly derived from the earlier Dialogues of his disciple Plato in which Socrates plays the principal part. The first step in Socratic conversation is to get a man to see that his existing ideas are wrong or inadequate. In doing this Socrates often employed a particular kind of self-deprecating humor which is known as Socratic irony. The method often resulted in self-important people being exposed as muddle-headed and stupid. This gained Socrates a great reputation, especially among the young, who enjoyed seeing the old-fashioned ideas of their elders destroyed by Socrates' criticism, but it also made him many enemies. The poet Aristophanes, for example, in his comedy of The Clouds represented Socrates as a person who, for money, was ready to teach people how to cheat by using dishonest quibbles.

In 404 BC Athens was finally defeated in the Peloponnesian War against Sparta, during which Socrates had served as a patriotic citizen. Athens' defeat was partly due to the treachery of Alcibiades and partly to the activities of a band of well-born desperadoes known as the Thirty Tyrants, who seized power in Athens towards the end of the war. Some of these, as well as Alcibiades, had at one time been associates of Socrates, although he was in no way responsible for their crimes. In 399 BC the restored democratic government put Socrates on trial on a charge of not worshipping the gods that Athens worshipped and of corrupting the young men of the city. The case was heard before an immense court of 501 jurors. Socrates had no difficulty in defending himself against the first part of the charge, and he would undoubtedly have been acquitted on both charges if he had been willing to abandon his mission. Instead of doing so he announced that, far from deserving any punishment, he regarded himself as a public benefactor. As a result of taking this line he was condemned to death. Even then it would have been quite possible for him to escape abroad, but he refused to take the opportunity, saying that to do so would mean abandoning the principles which had guided his whole life. Finally he died in prison by drinking a draught of hemlock, which was the traditional method of execution in Athens.

A literary version of Socrates' speeches at his trial is given by Plato in the Apology of Socrates, and the final scene is movingly described in the last pages of the dialogue Phaedo. These are amongst the most sublime passages in the whole of Greek literature, and they can be read in a number of good English translations.