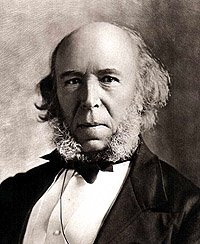 Herbert Spencer was an English philosopher, social theorist, and early evolutionist, who coined the phrase "survival of the fittest" and robustly defended the notion of evolution, both in terrestrial biology and the universe at large. In his multivolume System of Synthetic Philosophy (1862–1896), he expoundd a world view based on a close study of physical, biological, and social phenomena, arguing that species evolve by a process of differentiation from the simple to the complex. He maintained that some unknown (and unknowable) force generated order from chaos and drove the development of higher forms from lower ones. His beliefs overlapped with those of Friedrich Engels and Pierre Teilhard de Chardin and are most dissimilar to those held today by supporters of complexity theory. His political individualism deeply influenced American social thinking.