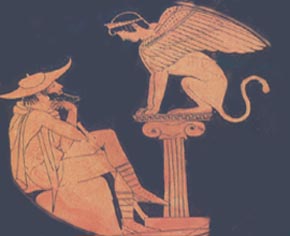 In Greek mythology, the Sphinx sat outside Thebes and asked this riddle of all travelers who passed by. If the traveler failed to solve the riddle, then the Sphinx killed him/her. And if the traveler answered the riddle correctly, then the Sphinx would destroy herself. The riddle: What goes on four legs in the morning, on two legs at noon, and on three legs in the evening? Oedipus solved the riddle, and the Sphinx destroyed herself. The solution: A man, who crawls on all fours as a baby, walks on two legs as an adult, and walks with a cane in old age. Of course morning, noon, and night are metaphors for the times in a person's life. Such metaphors are common in riddles. There were two Thebes, apparently this Thebes was the one in Greece. And this Sphinx was apparently not the one at Giza, in Egypt.