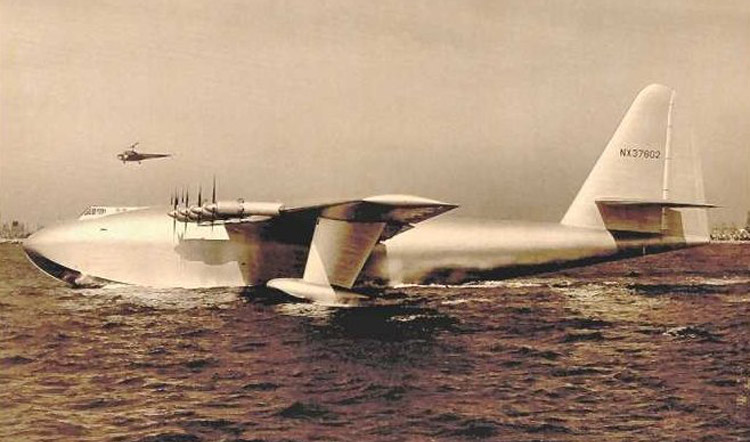 The Spruce Goose was the brainchild of eccentric pioneering aviator and aircraft designer Howard Hughes andthe largest flying seaplane ever built. It was designed originally to carry up to 60 tons of cargo or 750 troops across the Atlantic as an alternative to sea-going vessels which were vulnerable to attack by German U-boats. Designated initially the HK-1 and later renamed the H-4 Hercules, it was built, as stipulated in the contract, not from aluminum, which was considered a critical resource during the war, but from wood. This led to it being popularly called the "Spruce Goose", (even though the wood actually used was birch) or, less flatteringly, the "Flying Lumberyard".

Delays, due to Hughes' procrastination and obsession with detail, meant that although the contract for the giant plane was signed in 1942, the H-4 was still unfinished at the end of the war. Only on 2 November 1947, long after there was any real use for it or logic for its existence, was the Spruce Goose taxied out into Long Beach Harbor, in California, for its first and only flight. It was an awesome sight – the largest plane ever built up to that time (20% bigger than a Boeing 747), with wings, each supporting four massive engines, spanning 97.5 m (still, today, the longest wingspan of any aircraft in history) and a tail that soared seven stories high.

At the controls was – who else? – Hughes himself, supremely confident that the 180-ton bulk of his $25 million behemoth would rise into the air. "If it fails to fly," he'd said earlier, "I will leave the country. And I mean it." With a gaggle reporters and a small curious crowd watching from the shore (the test hadn't been widely advertised), Hughes throttled up the eight 4,000-hp Pratt & Whitney engines. Slowly, the Goose gathered speed, kicking up spray and smacking against the low waves as it strained to get airborne. To those watching, it must have seemed that the great seaplane was in danger of running out of harbor. But finally it rose, all of 60 ft out of the water, and traveled a mile, before flopping back down. The only journey of the magnificent, but now completely pointless, Spruce Goose had lasted less than a minute.

With the best will in the world, even if the US government had felt motivated to throw millions more at the project in peacetime (which it didn't), it's hard to see how Howard's folly could ever have served a useful purpose. With the throttle wide open, not much fuel in its tanks, a crew and passenger complement of just 32, and most of the cavernous space inside the fuselage empty, the Goose had struggled mightily to achieve flight. Whether it could have reached its service ceiling of around 20,000 ft and intended cruise speed of more than 250 mph, fully laden, will never been known. After its sole excursion, the plane was moved to a dry-dock, cocooned inside a huge, climate-controlled hangar, and never seen by the public again for another 30 years.