Fig 1. Sailing against the wind (1) is possible because the wind acting on a sail creates a lift (L) and a drag (D). These are equivalent to a driving force (F) and a leeway force (S). "Wearing" (2) is making a downwind turn, a method often used by square-rigged ships,such as carracks and galleons, when sailing into wind. This method loses some ground to windward. "Tacking" (3) is turning into and across the wind. This is a maneuver more easily done by fore-and-aft vessels than by square-riggers and loses less ground to windward than wearing.

Fig 2. Fore-and-aft rigs are able to point much closer to the wind than square-rigs when tacking in a zigzagging course to windward. After sailing the same number of miles the fore-and-aft vessel is thus much farther ahead. 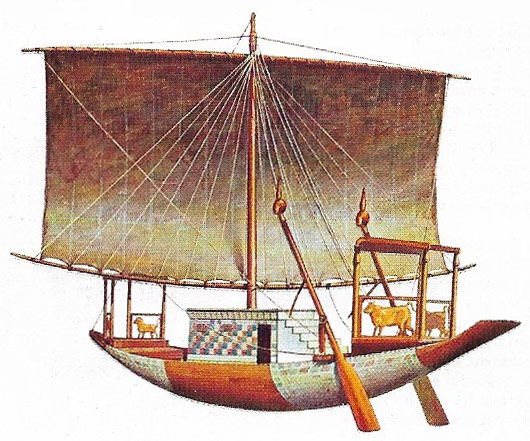 Fig 3. Egyptian ships of c. 1300 BC had a square sail and were steered by oars. The hull shape derived from reed boats. 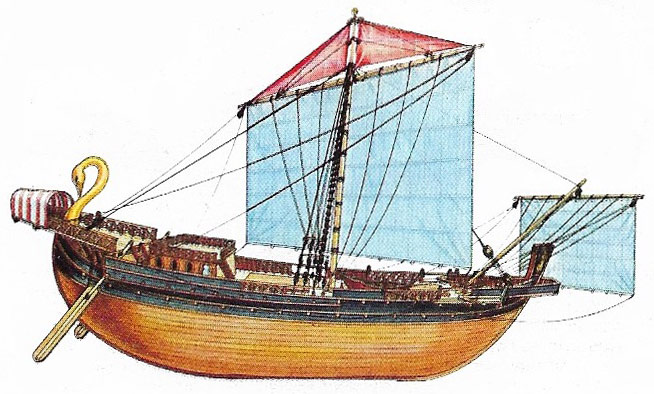 Fig 4. The Roman grain ships of the second century AD had a foresail, the artemon, and a topsail above the mainsail. 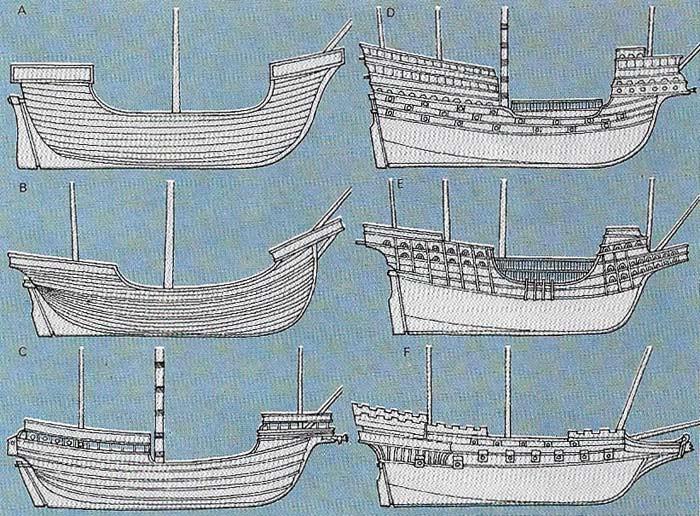 Fig 6. Drake's Golden Hind was a medium-sized Elizabethan galleon. Her deck was about 28 m (90 ft) long. The rig consisted of the square bowspirit sail, two square sails on the foremast, and two on the mainmast and a lateen on the mizzen. The hull was characterized by a slim underbody, a projecting head (derived from the galley's ram), a forecastle forming an integral part of the hull, and a transom stern with a stern galley. Steering was done with a whipstaff (the wheel only appeared during the eighteenth century). There were two full-length decks. Such ships were used both for war and commerce.

Fig 7. (A) The Dutch East Indiaman (1720) was larger than the Golden Hind, but of the same basic pattern. Two new sails appear: the spritsail topsail and the mizzen topsail. These heavily armed and extremely robust merchant ships could be used as men-of-war. (B) The clipper of the mid-19th century was a particularly efficient sailing ship. Its phenomenal speed made trading between Australia, China, United States, and Britain much more economical. The name clipper came from the way the ships could "clip off" the miles. (C) The four-masted steel barks of the late nineteenth century were built of steel and they carried manufactured goods, grain, and nitrates round the world. Their aftermasts had no yards. The bark rig appeared in the late 18th century and steel hulls in the 1870s. (D) The barkentine (19th–20th century) has three masts with a square rig only on the foremast, thus reducing crew size and hence running costs. (E) The brig (18th–20th century), a common coastal craft, has two masts, both of them square-rigged, and fore-and-aft staysails. (F) The brigantine (18th–20th century) has two masts with a square rig on the foremast and mainsails and staysails on the mainmast. (G) The topsail schooner (18th–20th century) is a fore-and-aft rigged vessel with one or more square topsails set on the foremast. 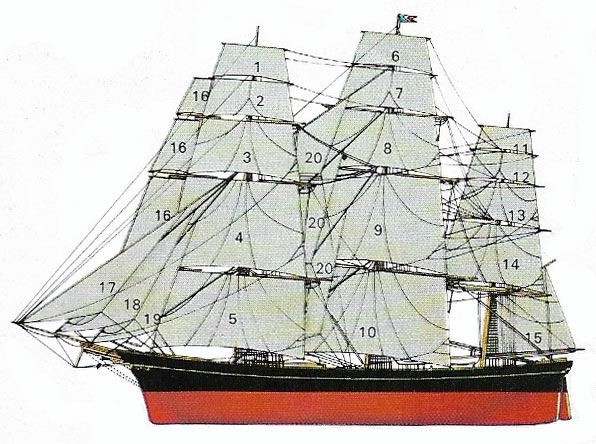 No one knows when or where the first sail was invented, but it was probably one of the first attempts at harnessing a natural force and putting it to work. The earliest evidence of sailing craft comes from Egypt and dates back to the third millennium BC. Ancient Egyptian ships (Fig 3) had single square sails spread by two wooden spars, a yard at the top and a boom at the foot; they could sail only downwind but since the wind in the Nile valley is nearly always from the north this allowed them to sail upstream. Going downstream did not require a sail.


Sailing against the wind

It was some time before it was realized that sails could be made that would propel a ship against a wind – not directly into it, but at an angle of less than 90° – and it is recently that the aerodynamics of such sails has been understood (Fig 1). Another early breakthrough was the invention of the keel, a long plank running from stem to stern, from which the rest of the hull could be built up.

The square-rigged ships of the Middle Ages could not sail much closer to the wind than 90° and even the latest square-riggers cannot sail closer than about 70°. The "fore-and-aft" sail(in which the forward edge is secured to, and pivots around, a mast or stag), such as the Mediterranean lateen and the triangular Bermudan sail of modern yachts, can hold a course as close as 45° to the wind (Fig 2).

The fore-and-after idea appears to have evolved in the Indian Ocean from the Egyptian square sail in the third century AD – leading to the lateen sail of the Arab dhows and to the lug-sail of the Chinese junk. The square sail did, however, survive until the end of commercial sailing ships because it was more efficient than the fore-and-aft sail on long voyages with following winds.

The Romans improved on the Egyptian rig by adding the artemon (spritsail) and a triangular topsail (6), but as in the Egyptian ships before and the Viking ships later, steering was done with an oar lashed near the stern. The Chinese, however, had known about the axial rudder and the compass since about the first century AD. The former allowed better steering and was more robust than the steering oar; the latter allowed navigation out of sight of land without fear of overcast skies hiding the stars. These discoveries reached Europe only in the later years of the eleventh century and had great consequences in the development of European seafaring.


Development of ship and sail

The multi-masted ship originated in China and the idea was brought to the West at the time of Marco Polo in the thirteenth century. Before this time, vessels such as the single-masted double-ended cog had been used extensively for trade around Europe and the Mediterranean. By the end of the fifteenth century, three-masted ships had become a common feature of European waters. The deep, broad carrack (Fig 5) was one such common trading vessel and the caravel was also developed at this time. Used mainly by the Portuguese, the caravel was a simpler and lighter vessel. It carried lateen sails (fore and aft) but sometimes the foremast was square-rigged.

The galleon (Fig 5), which appeared in the mid-sixteenth century, was a cross between the heavy carrack and the slim Venetian galley. Galleons had slimmer hull lines (Fig 6) than the carracks, a square stern where the carracks were "double-ended" and a forecastle well inboard instead of hanging over the bow.

The transition from the carrack to the galleon was the last big technological jump for sailing ships. The difference between a sixteenth-century galleon and a nineteenth-century packet ship, such as the Blackwell frigate, was one of detail although the performance of the latter was far superior. The gradual evolution since the early galleons involved an increase in the size and number of sails, and the introduction of fore-and-aft staysails between the masts and jibs in front of the foremast.

From the mid-eighteenth century onward, the Western sailing ship branched out in a variety of rigs, from two masts to six or even seven in the instance of a pure fore-and-after schooner, the Thomas W. Lawson.


The last of the sailing ships

The fastest, the most beautiful, and the most short-lived of the great sailing ships was the clipper (Fig 7). She was developed in the 1820s in the United States, reached the height of her fame in the 1850s and 1860s, and by the end of the century was obsolete.

The clipper was built primarily for speed. She was slim and light, with a limited cargo space, and carried an enormous area of canvas. She fulfilled a variety of needs. The Californian and Australian gold ruches (1849 and 1851), the China tea trade, and, from the 1870s, the trade in wool and grain from Australia were all served by clippers. The competition between ships' companies in the race to make fast passages and high profits produced crews of the highest quality.

Such factors as steamships, the opening of the Suez Canal, and the transcontinental railways made the clippers obsolete. They were replaced by large windjammers that were built of steel and where cargo-carrying capacity and labor-saving devices were given precedence over speed. Despite their much greater tonnage (up to 5,800 metric tons) they did not require larger crews than the clippers. Even these ships were eventually killed by steamship competition.