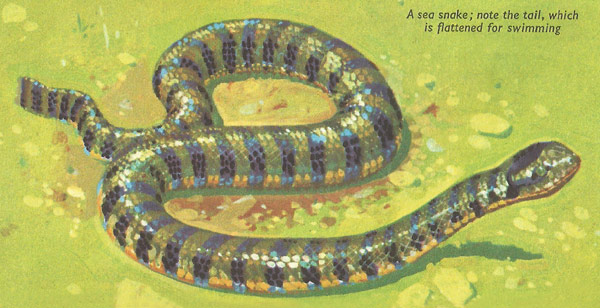 A sea-snake. Note the tail, which is flattened for swimming.

In the tropical parts of the Indian and Pacific Oceans there are several species of snakes that live in the sea.  A few of them, like the amphibious sea snake (Laticauda colubrine), come to shore to lay their eggs, but most of them remain permanently in the sea, and all these bear their young alive.  Sea snakes can be recognised by the tail, which is flattened from side to side, like the blade of an oar.  This is an adaptation for swimming.

The venom of sea snakes is extremely powerful, and acts on the nervous system.  The bite itself is not painful at all, but some hours after it the victim becomes paralysed and, in fatal cases, unable to breath.