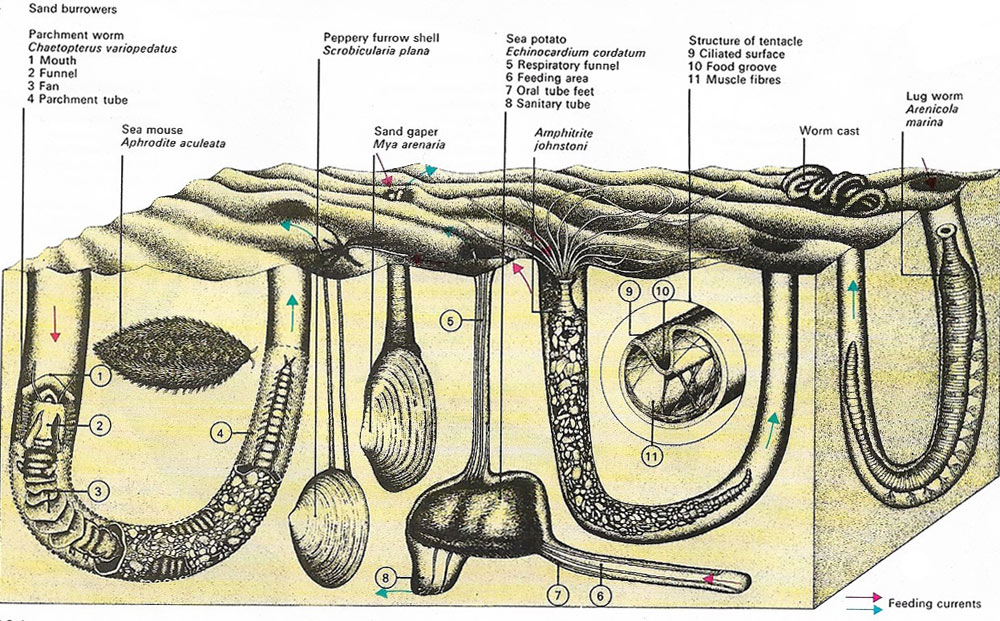 Fig 1. The surface of a sandy beach at low tide gives few clues to the amount of life hidden beneath it. The principal inhabitants are worms and bivalves of many kinds, but other animals such as burrowing sea urchins and crabs may also be present. Most bivalves depend on the planktonic richness of the sea for their food: when the sand is covered at high tide they push siphons up to the surface and pump a flow of water that circulates through their fill system. By this means oxygen is removed and food particles are trapped. Worms may use specialised tentacles or, like the lugworm, eat sand to swallow the tiny inhabitants of the water film round each grain.

Fig 2. Barnacles, sea snails and seaweeds are typical of seashore life. Barnacles (A) feed by opening their shelly plates when submerged, catching minute, suspended food particles. Many sea snails, such as the dog whelk (B), eat flesh. A dog whelk rasps through the shells of barnacles and mussels with its strong, file-like tongue (radula) to reach the unprotected animal inside. Seaweeds do not have roots but attach themselves to rocks with strong, branched holdfasts (C). 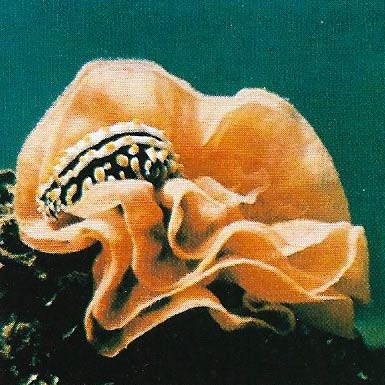 Fig 3. Sea slugs are snails without shells but unlike land slugs they are frequently beautiful. This one is crawling over a red seaweed. They owe their protection, in part, to their unpalatable taste. 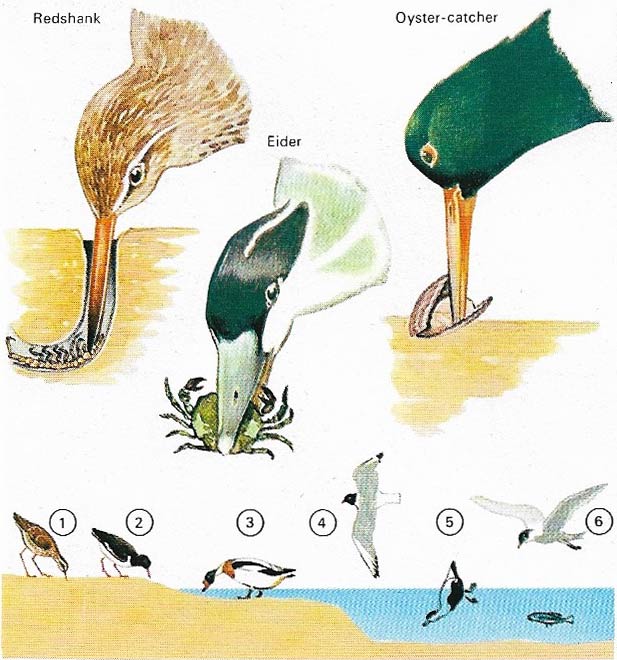 Fig 4. Many species of birds feed on the small animals of the shore. Gulls will eat almost any kind of food but most of the others are specialists and will eat only a narrow range of organisms. Waders such as the redshank probe the mud with long, thin bills. The oystercatcher can open cockle shells at a blow. The bills of eider ducks crush the shells of crabs and sea urchins. 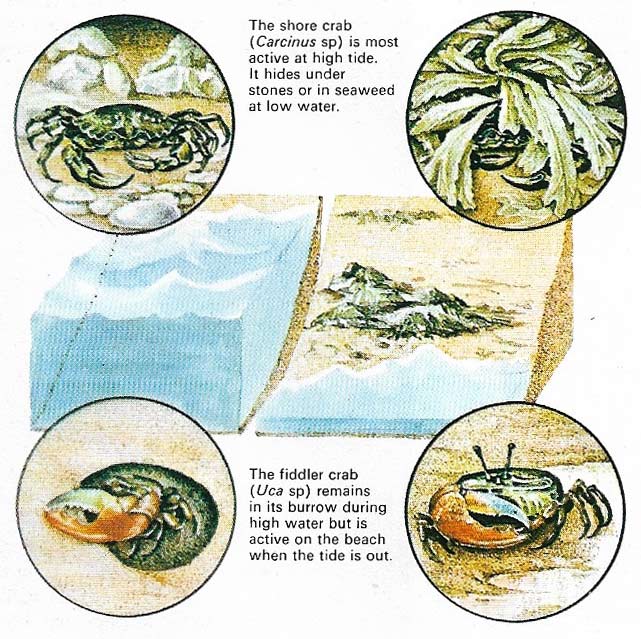 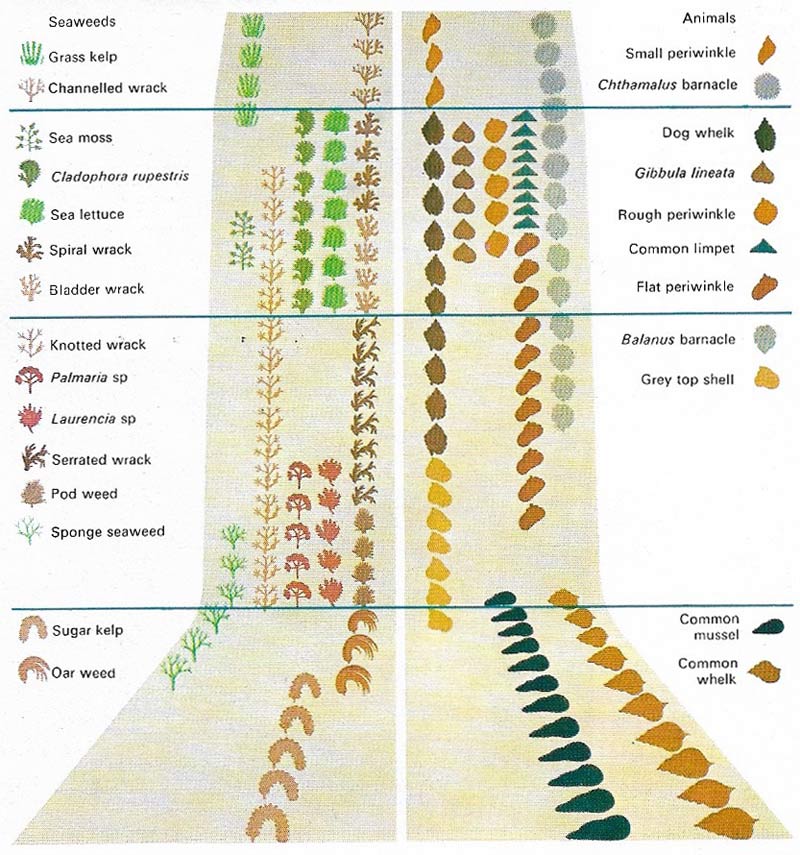 Fig 6. Most living things are closely zoned to a narrow part of the shore and no single species of plant or animal is found in all zones. Among algae, green species live on the higher levels of the shore although channelled wrack, a brown weed, is often found on rocks at the landward edge of the beach. Brown weeds generally belong to the middle of the shore although the oar weeds extend below the bottom of the tide line. The fragile-looking red weeds grow on the lower shore. Animals are also zoned. Sometimes there is an association between a particular species and seaweed, such as that between the flat periwinkle and bladder wrack. Those that can endure the greatest desiccation and varied conditions live at the top of the shore, while those that require greater stability are found closer to the sea.

The shore lies between the land and the sea, allied to both yet belonging to neither. It is a zone defined by the daily rise and fall of the tides, washed by salt water, but exposed to the damaging effects of drying air.

The type of beach is dependent on its hinterland – hard rocks give a cliff Ed and rocky shore while softer rocks give a sandy or muddy beach – and on the effectiveness of the waves in eroding the rocks.

On shingle or pebble beaches it is impossible for plants to grow because the action of the waves causes the stones to rub together and grind off any life form that attempts to gain a foothold. The only animals on a pebble beach exist on the strand line at the edge of the high tide mark.

As well as the composition of the beach other factors that have an important influence on its fauna and flora are its aspect and degree of slope. Shallow, sloping beaches offer a far greater area for the development of animals and plants than do steeper beaches. The effect of the tide on sea-shore life is also altered by the degree of slope, because the steeper the slope the fiercer are the waves. On a steeply sloping beach the waves have a greater scouring action, preventing all but the most tenacious animals and plants from securing a foothold.

Once seaweeds do obtain a hold on shallow, rocky shores they exert a great modifying influence on wave action. Beneath their sheltering fronds large numbers of less well-adapted plants and animals are able to find a secure home.

The beach can be divided into a series of zones (Fig 6) according to how far it is influenced by the water. At the land edge is the splash zone, normally wetted only by sea spray but still affected by the maritime influence. Below this is the upper shore extending from the level of high spring tides down to the average high tide level. The middle shore runs from there to average low tide level and the lower shore from that point to extreme low spring level. A walk from the upper shore to the low tide line shows that the plants and animals change with their level on the beach. This zonation is one of the most characteristic features of the seashore.

The beach as a whole is the most variable of all environments. When the tide is out the drying effects of the wind and sun threaten the plants and animals of the upper shore. Of they are not to become desiccated they have to be well protected. In summer the beach and the rock pools may warm up considerably, but they are cooled in a moment when the water comes splashing back. At low tide the salinity of rock pools may increase with evaporation or decrease if there is heavy rainfall. The acidity of rock pools is low during the daytime when plants are photosynthesizing but may increase seven-fold at night when they are producing carbon dioxide. Most plants and animals are adapted to live in a narrow range of temperatures, salinity and acidity but organisms of the shore can stand continuous large variations in their environment.

The plants of the shore are almost all seaweeds (Fig 6). These are entirely different from land plants in that they have no roots, stems, leaves, flowers or fruit. Supported and bathed in seawater, they absorb all the nutrients they need directly from the sea. All photosynthesize, but in many the green of the chlorophyll is masked by other pigments that assist photosynthesis at low light levels or screen the chlorophyll from intense light. Defended against desiccation by sticky mucilage, they are often unattractively slimy objects when found at low tide or when cast up on the beach. Under water they are transformed, for their structure allows the fronds to be carried towards the light.


Animals of the shore

Among the animals of the shore, most of the major groups, or phyla, are represented. Frequently brightly colored and of bizarre shapes, to many people they are one of the great attractions of the seaside. On the middle and upper shore in particular, many are protected against battering force of the waves by heavy shells, although others creep into burrows or cracks in rocks either in times of storm or at low tide. Most are more or less sedentary but they produce planktonic larvae that float off in the water and may colonise other beaches.

The feeding patterns of beach animals are complex. A few animals eat the seaweeds, but the big algae are largely inedible, although their smaller relatives of the open sea are the basis of all life in the oceans. Some animals are carnivores (Fig 2), some are scavengers and many are filter feeders, finding food in what they can strain fro moths floating life of seawater. A variant is found in the sand eaters (Fig 1), which ingest vast amounts of sand in order to devour the tiny animals whose homes are the jackets of water that surround each sand grain.

Apart from recreation man has little use for the seashore. In some places minor industries are based on collecting mollusks or crustaceans or even the algae. Unfortunately most seaweeds cannot be digested by man or most other large animal unless processed to provide useful minerals (particularly iodine) and mucilage. Some seaweeds also yield alginates. These chemicals are the basis of "instant" deserts and other edible products.