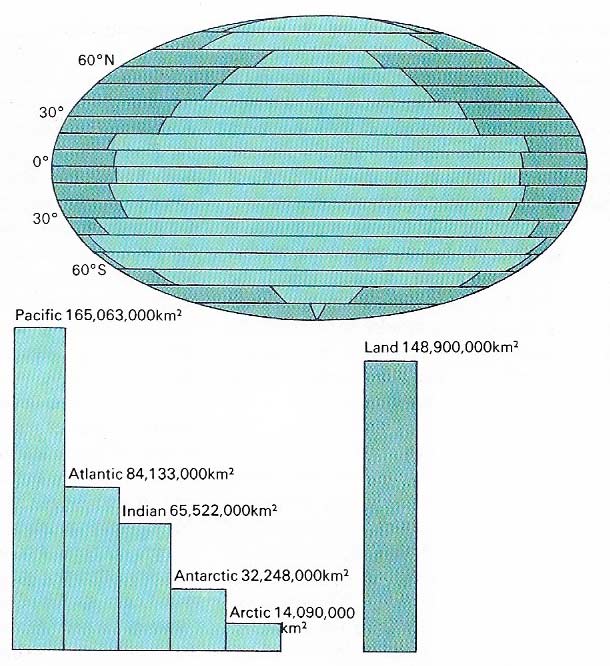 Fig 1. Oceans cover about 70% of Earth's surface, The five oceans are interconnected and can be thought of as one large oceanic mass. 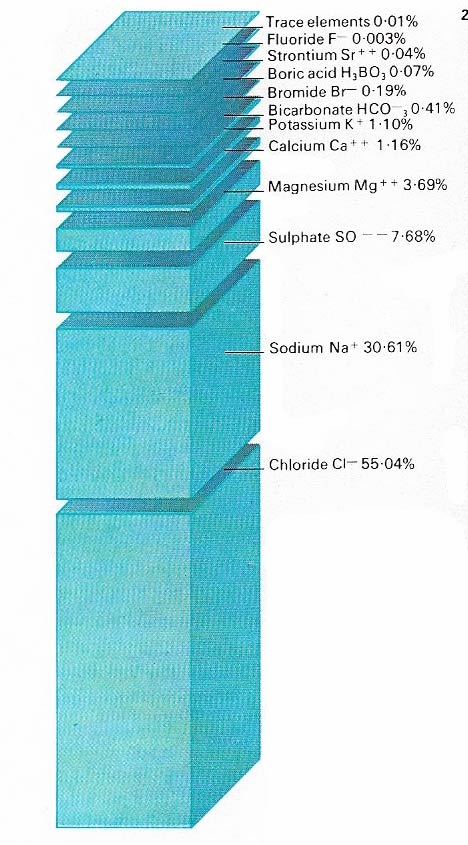 Fig 2. Nearly all natural elements are found in seawater. Sodium and chlorine make up common salt and form more than 85 percent of the total substances in seawater. Trace elements include aluminum, magnesium, copper, and gold. If the salt in the oceans were precipitated, it would cover Earth's land areas with a layer 153 m (520 ft) thick. 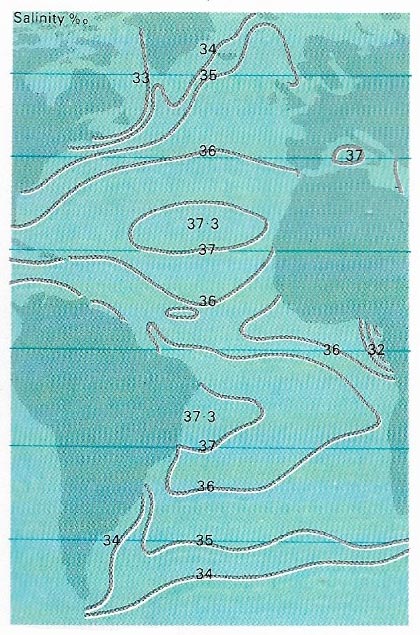 Fig 3. In an isohaline map of the Atlantic Ocean the lines join places of equal salinity. The range of salinity in most of the ocean is between 33 and 37 parts per thousand. The map shows that salinity in the tropics, where the evaporation is considerable, is relatively high. In the almost enclosed Mediterranean Sea it is higher still. In the Arctic, however, the salinity is lowered by melting ice and rainfall. In Hudson Bay the salinity falls considerably below the normal ocean values because of the inflow of fresh water from rivers. In the tropic, large rivers, such as the Amazon, reduce the salinity locally. 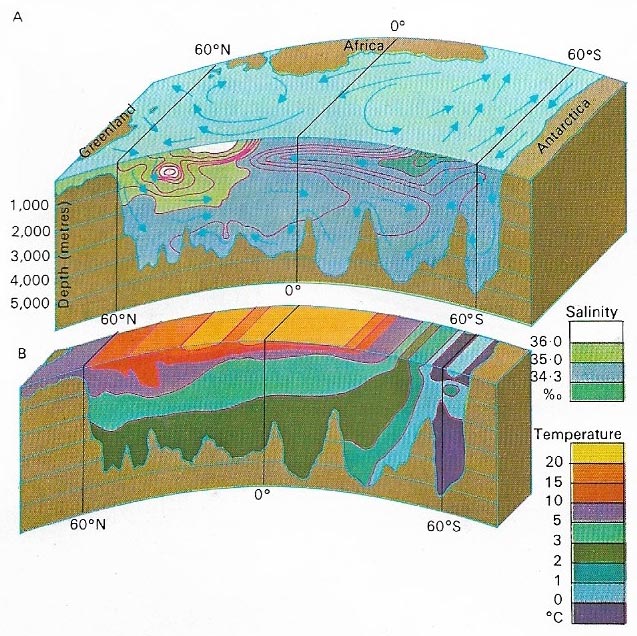 Fig 4. The physical properties of seawater, including the salinity (A) and temperature (B), are relatively constant at depth compared with the variations produced by local conditions at the surface. The surface salinity varies greatly with inflows of fresh water and variations in the rate of evaporation but it remains quite constant at depth as mixing of water by deep currents is very slow. The same is true of the temperature, which remains fairly constant at depth despite the climatic variation at the surface. In the Atlantic Ocean, as illustrated, a larger body of cold water exists at the south than the north and this has some effect on the temperature range.

Photography of the Earth from space suggests that "Ocean" would be a more suitable name for our planet, because the oceans cover 70.8 percent of the Earth's surface. There are three main oceans: the Pacific, the Atlantic, and the Indian, but the waters of the Arctic and Antarctic are also described as oceans (Fig 1). These five oceans are not separate areas of water but form one continuous oceanic mass. The boundaries between them are arbitrary lines drawn for convenience.


The study of oceanography

The vast areas of interconnected oceans contain 97.2 percent of the world's total water supply. The study of oceans, including their biology, chemistry, geology, and physics, has become a matter of urgency, because mankind's future may depend on greater knowledge of the ocean's potential resources of food, minerals, and power.

The most obvious resource of the oceans is the water itself. But seawater is salty, containing sodium chloride (common salt), which makes it unsuitable for drinking or farming. One kilogram (2.2 lb) of seawater contains about 35 g (1.2 oz) of dissolved material, of which chlorine and sodium together make up nearly 30 g (1 oz) or about 85 percent of the total.

Seawater is a highly complex substance in which 73 of the 92 natural chemical elements are present in measurable or detectable amounts (Fig 2). Apart from chlorine and sodium seawater contains appreciable amounts of sulfate, magnesium, potassium,and calcium, which together add up to over 13 percent of the total. The remainder, less than one percent, is made up of bicarbonate, bromide, boric acid, strontium, fluoride, silicon, and trace elements. Because the volume of the ocean is so great, there are substantial amounts of some trace elements. Seawater contains more gold, for example, than there is on land, although in very low concentration of four millionths of one part per million.

Also present in seawater are dissolved gases from the atmosphere, including nitrogen, oxygen, and carbon dioxide. Of these, oxygen is vital to marine organisms. The amount of oxygen in seawater varies according to temperature. Cold water can contain more oxygen than warm water. But cold water in the ocean depths, which has been out of contact with the atmosphere for a long period, usually contains a much smaller amount of oxygen than surface water.

Other chemicals in seawater that are important to marine life include calcium, silicon, and phosphates, all of which are used by marine creatures to form shells and skeletons. For cell and tissue building, marine organisms extract such chemicals as phosphates, certain nitrogen compounds, iron and silicon. The chief constituents of seawater – chlorine, sodium, magnesium, and sulfur – are hardly used by marine organisms.


The salinity of the oceans

The volume of dissolved salts in seawater is called the salinity of the sample. The average salinity of seawater ranges between 33 and 37 parts of dissolved material per 1,000 parts of water. Oceanographers usually express these figures as 33 parts per thousand (330/00 to 370/00). The salinity of ocean water varies with local conditions. Large rivers or melting ice reduce salinity, for example, whereas it is increased in areas with little rainfall and high evaporation. The Baltic Sea, which receives large quantities of fresh water from rivers and melting snow, has a low salinity of 7.20/00. The highest salinity of any ocean is in the Red Sea where it reaches as much as 410/00.

To produce fresh water from seawater the dissolved salts must be separated out. This desalination can be carried out by electrical, chemical, and change of phase processes. Change of phase processes involve changing the water into steam and distilling it, or changing it into ice. The Inuit have used sea ice as a source of fresh water for hundreds of years and coastal tribes still take salt from the sea by damming water in pools and letting it gradually evaporate in the Sun.

The density of seawater is an important factor in causing ocean currents and is related to the interaction of salinity and temperature. The temperature of surface water varies between –2°C and 20°C (28°F and 85°F). Ice will begin to form if the temperature drops below –2°C (28°F).

The properties of light passing through seawater determine the color of the oceans. Radiation at the red or long-wave end of the visible spectrum is absorbed near the surface of the water while the shorter wavelengths (blue) are scattered, giving the sea its blue color. The depth to which light can penetrate is important to marine life. In clear water light may penetrate to 110 m (360 ft) whereas in muddy coastal waters it may penetrate to only 15 m (50 ft).

Water is a good conductor of sound, which travels at about 1,507 m (4,954 ft) per second through seawater, compared with 331 m (1,087 ft) per second through air. Echo sounding is based on the measurement of the time taken for sound to travel from a ship to the seafloor and back again. However, temperature and pressure both affect the speed of sound, causing the speed to vary by about 100 m (328 ft) per second and creating phenomena such as sound "shadow" zones and slow velocity zones.