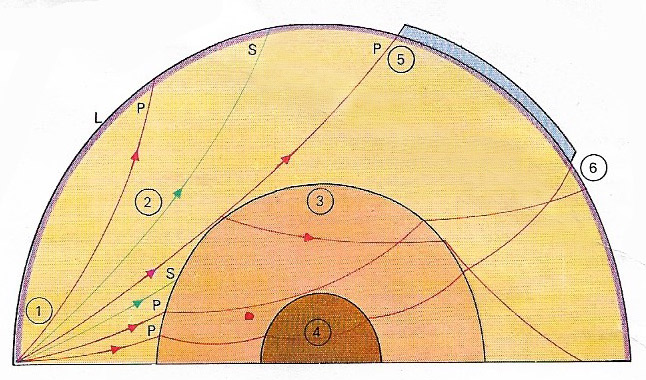 Fig 1. Seismic wave paths vary with the density of the rock, forming curving patterns as they move away from the focus (1). Primary (P) waves can pass through gases, liquids, and solids. The primary waves travel fastest, increasing their velocity as they pass through the mantle (2) but dropping in the outer core (3) and rising in the inner core (4) due to the conditions produced by pressure. Secondary (S) waves travel through solids only and do not penetrate into the dense molten core. As the waves travel down they meet concentric layers of increasing density which bend or refract the waves toward the surface so that these travel along curved paths. The region between 5 amd 6 does not receive any direct waves. This area is known as the wave shadow zone. Seismic wave propagation has given invaluable information about Earth's interior. 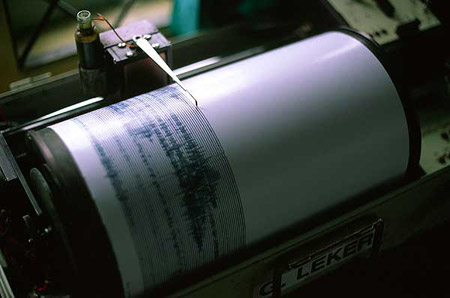 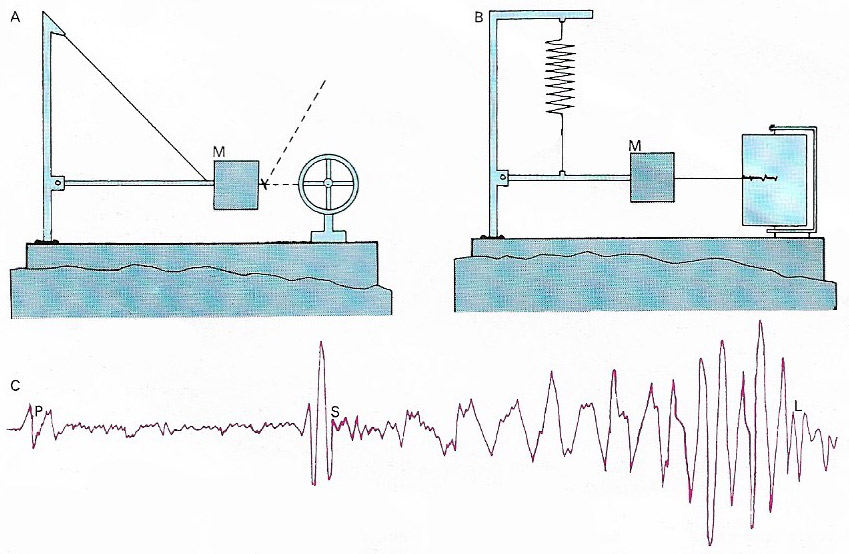 Fig 3. Seismographs are instruments that detect and record seismic waves of the three types (P, S, and L). Most seismographs contain a sprung mass (M) which, when an earthquake passes, stays still while the rest of the instrument moves. Some seismographs detect horizontal motion (A) while others detect vertical motion (B). The trace of the waves is recorded by a vibrating pen on a traveling strip of paper (C). The time interval between the arrival of the P and S waves can be calculated and this interval, applied to a graph, gives the distance between the station and epicenter.

Seismology is the study of earthquakes and the seismic waves they produce (Fig 1). The movement of seismic waves is detected and recorded by seismographs (Fig 2). The detection involves the separation of events from the ever-present background of seismic noise. Pinpointing sites of events has become very accurate since the development of precise instrumentation and the establishment of the World Wide Standard Seismograph Network (WWSSN). Seismology is very important in the exploration of Earth's internal structure.

A seismograph is an instrument used to record seismic waves caused by earthquakes nuclear explosions, etc., and in prospecting. The record it produces is called a seismogram. In its simplest form, it contains a horizontal bar, pivoted at one end and with a recording pen at the other (Fig 3). The bar, supported by a spring, bears a heavy weight. As the ground moves, the bar remains roughly stationary owing to the inertia of the weight, while the rest of the equipment moves. The pen traces the vibrations on a moving belt of paper. Most modern seismographs are based on the type developed by John Milne and his colleagues in the 1880s.