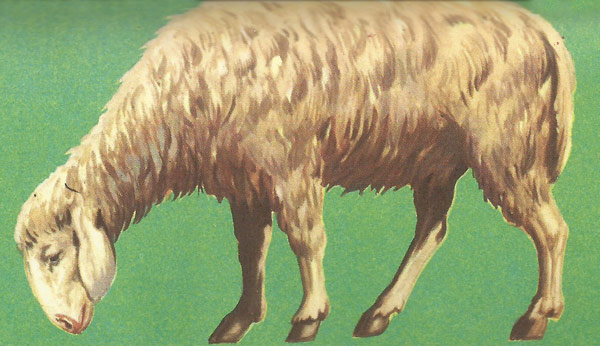 How the sheep eats: 1. The grass, not yet chewed, fills the rumen; 2. The grass passes from the rumen to the reticulum and thence returns to the stomach; 3. The chewed grass descends to the psalterium or manypiles and then to the abomasum. 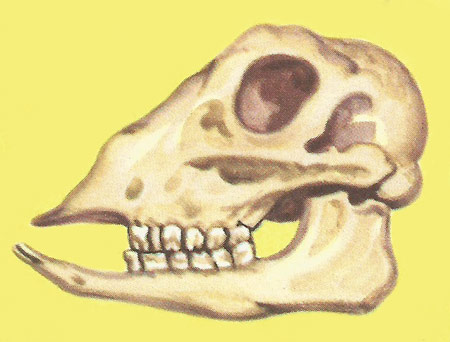 Sheep graze on sparse grass which is found even on stony or weed-ridden ground. It also does not require much water. The one thing that the sheep does require is salt. Salt improves the sheep's appetite and helps to keep its fleece shiny. The fleece is the wool which covers the sheep, protecting it from the weather and keeping its temperature even.

The sheep is an animal that suckles its young and is therefore a mammal, and because it chews the cud, or ruminates, it is known as a ruminant.

What does ruminate mean? It is the strange way some animals eat grass: the ox, sheep, goat, ibex, deer, dromedary, camel, etc. These animals do not chew the grass once, but swallow it almost whole and store it up in the rumen, one of the four bags which the stomach is made of.

Later, when they are resting, they make the grass pass from the rumen to the second bag, the reticulum. This makes the grass into many wads and pushes them up into the animal's mouth again.

Now, finally, the grass is chewed and swallowed for the last time; then it passes into the two bags which form the stomach proper, the psalterium and the abomasum, where the real digestion begins. The food then passes into the intestine.

Like all ruminants, the sheep is a quadruped which walks on the tips of its toes. In fact, the part which rests on the ground is not, as many believe, the foot, but only the ends of the toes.

The chief toes, two to each foot, are protected by a nail called a hoof, as with the goat, ox, pig, camel and giraffe.

All mammals have their bodies protected by hides.

The hide in its turn is, in the case of the sheep, covered with a long soft, woollen fleece.

A mammal because it suckles its young

An artiodactyl because it has an even number of toes

A ruminant because it chews the cud

A cavicorn because it has hollow horns

Herbivorous because it feeds only on grass

It weighs on the average of 130 lb

It supplies about 4 lb of wool at every shearing.