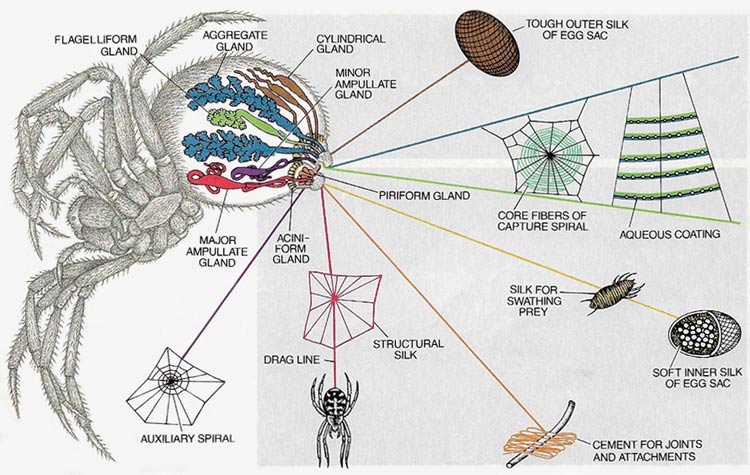 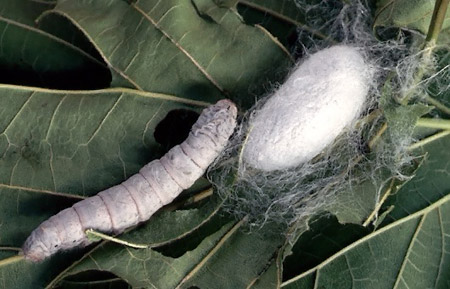 Silk is a strong, natural fiber produced by certain insects and spiders to make cocoons and webs, a glandular secretion extruded from the spinneret and hardened into a filament on exposure to air. The fiber consists of fibroin – a tough, elastic protein – covered with sericin (gelatinous protein).

Commercial textile silk comes from the various silkworms (see below), which feed on mulberry leaves. The cocooned pupae are killed by steam or hot air, and the cocoons are placed in hot water to soften the gum (sericin) that binds the silk. The filaments from several cocoons are then unwound together to form a single strand of "raw silk," which is reeled. Several strands are twisted together, or "thrown," to form yarn. At this stage, or after weaving, the sericin is washed away. The thickness of the yarn is measured in denier.

The Chinese were the first to use silk and its production was a closely guarded secret, since it could fetch its own weight in gold. Sicily was one of the first European production centers and the industry spread to Italy, Spain, and France. Silk manufacturing developed in England in the 17th century. China is still the largest produced of raw silk in the world.

The silkworm is the caterpillar of a moth, Bombyx mori, which, like many other caterpillars, spins itself a cocoon of silk in which it pupates. The silk is forced out through a small spinneret between the jaws and hardens on contact with air. The cocoon of B. mori is especially thick and may be composed of a single thread commonly 900 m (2,950 ft) long. This is unraveled to provide commercial silk. Originally a native of China, B.mori has been introduced to many countries. The caterpillar, which takes about a month to develop, feeds on the leaves of the mulberry tree.