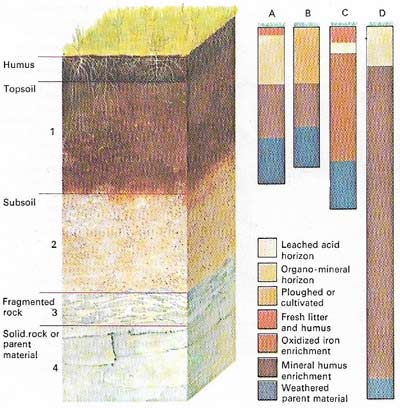 Fig 1. The profile of the soil reaches down from the most recently deposited topsoil to the parent bedrock revealing the various recognizable layers or horizons. Beneath a horizon of gray-black topsoil (1) and its upper layer of humus there lies the subsoil layer (2) which, while poor in organic materials, is richer in accumulated minerals than both the topsoil and humus above it. Horizon 3 is made up of the partially weathered particles of the lifeless parent bedrock (4) at the bottom. Profile A is of acid brown earth found in temperate climates – this one on sandy rock – and B is a cultivated brown earth of the same climatic region. Gray leached podozol is typical of wet, cool climates – for example, the taiga in Russia – while oxisol (D), a thick red soil containing iron compounds, is found I humid, tropical lands where chemical and biological activity are both high. 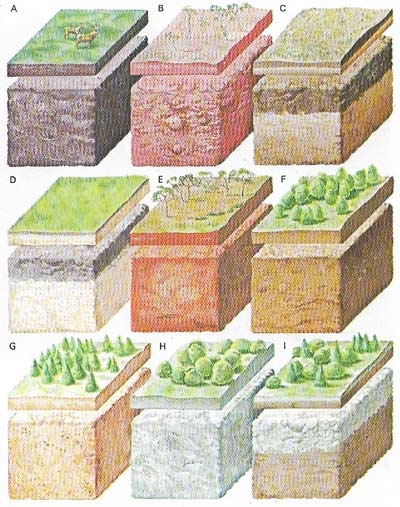 Fig 2. The composition and color of a soil identifies it to a pedologist. This tundra soil (A) has a dark, peaty surface. Light-colored desert soil (B) is coarse and poor in organic matter. Chestnut-brown soil (C) and chernozem (D) – the Russian for "black earth" – are humus-rich grassland soils typical of the steppes and prairies of North America. The reddish, leached latosol (E) of tropical savannas has a very thin but rich humus layer. Podzolic soils are typical of northern climates where rainfall is heavy but evaporation is slow. They include the organically rich brown forest podzol (F), the gray-brown podzol (H) and the gray-stony podzol (I) that supports mixed growths of conifers and hardwoods. All are relatively acid. The red-yellow podzol (G) of pine forests is, quite highly leached.

Fig 3. The soil is a complex ecosystem. A square meter of fertile soil teems with more than 1,000 million individual forms of life, from microscopic organisms to insects, worms, and large animals such as burrowing rodents. In the steppes, for example, these include marmots, susliks, hamsters, and molerats. All play an important part in helping to aerate the soil and to accelerate the processes of decay and of humus formation. 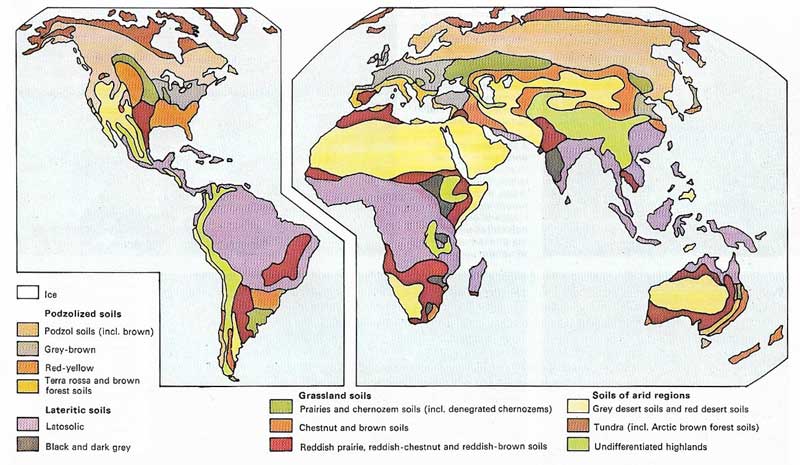 Fig 4. Soil groups can be correlated with the various climatic and vegetational zones of the earth. Podzolic soils are found in moist, cool climates. Latosols and black or dark grey soils are common to the equatorial regions between the tropics of Cancer and Capri-corn. In sub-humid and semi-arid temperate zones of the world, where the land is at its most fruitful, the prevalent soils are chernozem, chestnut-brown and reddish prairie. Grey or red soils are typical soils of the near-barren desert regions of the earth, while sub-polar climates are characterized by the scanty tundra soils bearing only sparse vegetation.

Fig 5. Climate exerts the strongest influence on the nature of soil on which plant and animal life depends, and this, in turn, determines which species will flourish best in its particular area. Tundra and desert soils can support only a slender indigenous plant and animal population, but ephemeral life – in the tundra, during its brief summer, or the desert regions after exceptional rainfall – will attract a considerable visiting population of animals. Other soils such as latosol support a wide range of plants and animals: in the African savannas, for example, with their huge populations of herbivores and attendant predators. 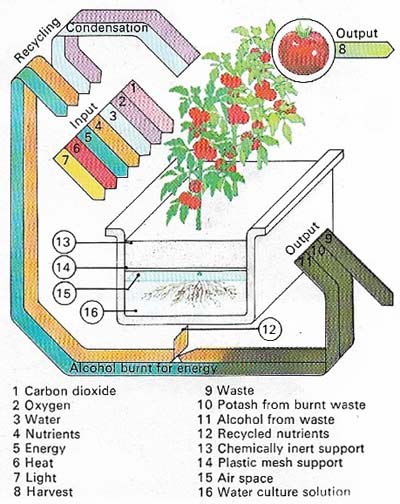 Fig 6. Hydroponics is the science of making substitutes for soil and has been successful in growing plants in totally soilless conditions. In hydroponic agriculture all a plant's needs, including oxygen, light, water, mineral salts, and other nutrients, are artificially provided within the protected and temperature-controlled environments of a greenhouse. There plants are freed from competition with weeds, and damage by insect pests and viruses is reduced.

All forms of life on land depend directly or indirectly on soil. Soil is a result of all the processes of physical and chemical weathering on the barren, underlying rock mass of the earth that it covers, and varies in depth from a few centimeters to several meters. The depth of soil is measured either by the distance to which plants send down their roots or by the depth of soil directly influencing their systems. In some places only a very thin layer is necessary to support life.

Pedology (Fig 2), the study of soil and its unique biological, chemical and physical properties, is a science that first came into its own at the close of the nineteenth century when the Russian geologist Vasilii Dokuchaev (1846–1903) identified the basic determining factors in the morphology – structure or form – of soils.

If soil is the outcome of time and weather at work upon rock it remains an unconsolidated mass of inorganic particles until it acquires a minimum organic content and plants take root and deposit their litter within. As the organic matter accumulates fine humus builds up in the upper soil horizons (Fig 1), enriching them chemically and providing an environment for a wide variety of life forms. In the course of time plants, fungi, bacteria, worms, insects, and burrowing animals such as rodents and moles reproduce in the soil and thrive in the complex ecosystem of a mature soil (Fig 3).

The formation of soil is the result of the interaction of five major elements – the parent rock, land relief, time, climate and decay. The parent rock is the source of the vast bulk of all soil material. During weathering this rock is physically reduced to a mass of gravel, sand, silt and clay. Soil is not always identical to its parent material because of the numerous chemical transformations and physical disturbances it may undergo during its formation.

Land relief is another factor influencing the creation of soils. On steep slopes only thin, dry layers accumulate because of the rapid water run-off. In level, high country, soil layers dense with clay tend to accumulate. Where organic decay is slow, in poorly drained regions, thick layers of dark organic soils build up. A hillside receiving direct sun will acquire a different soil from that hidden from direct exposure, because of the differences in moisture content. Time is another passive agent in the formation of soils. Young soils have almost no distinct horizon markings, whereas mature ones acquire a well-marked profile that undergoes only minimal changes with the passage of time.

The single most important factor in the development of soil is climate (Fig 4, 5). Water is essential to all chemical and biological change in soil; as it percolates through, it leaches the surface layers (this is "eluviation") and deposits material in the subsoil ("illuviation"). In areas of heavy rainfall the soil undergoes extreme leaching and is rendered relatively sterile. In contrast, excessive evaporation in arid climates results in the building up of salt deposits in the soil.

Temperature directly affects the rate of chemical and biological activity in the soil. In tropical climates where such activity is high, decay is rapid and the soils are poor in humus. In tundra regions, where the topsoil is frozen for more than half the year, and the subsoil is permanently below freezing point, the reverse holds true: organic matter accumulates in thick layers.

Lateritic soils are an excellent illustration of the effects of climate. In hot, wet environments such soils are highly leached, and contain little other than deposits of iron and aluminum oxides. If directly exposed to the fierce tropical sun, these soils become a baked, brick-like mass known as laterite to which vegetation can never return.


The importance of decay

A variety of biological factors influence soil formation. Plants stabilize the earth by reducing erosion and surface runoff. They also maintain soil fertility by concentrating organic material and nutrients back at the surface after they have been washed down. As they decay the plants also provide the fine organic humus litter vital to soil life.

The role of soil bacteria is crucial for they not only fix nitrogen from the air in a form that plants can use but also promote the processes of decay. Animals whose homes are in, the soil have an important if largely mechanical function in shifting and aerating the soil – it has been estimated that earthworms alone can turn over between one and ten tons of soil per hectare per year. As they eat and, excrete the soil they also change its texture and composition.

Under normal conditions soils naturally replenish themselves. Yet where ruinous agricultural practices prevail, soils can easily deteriorate in fertility. A dramatic illustration of this is the dust bowl, a man-made desert from which the valuable topsoil has been removed by the wind in conditions of continuing drought. This is brought about by certain farming practices in regions with unsuitable climates.

Soil conservation is the effort to avoid this destruction of the soil and to maintain it at the most productive level possible. This requires a combination of all the techniques of soil science in preparing the land, irrigating it, fertilizing it and planting the right crops to stabilize the soil and prevent erosion.