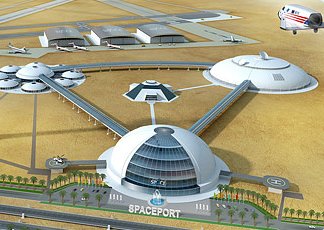 A spaceport is a facility for launching, testing, maintaining, and storing space launch vehicles, including conventional rockets and space planes. The term is analogous to airport.

Some present day launch sites and facilities are often called spaceports. The European Space Agency, for example, refers to its launch site at Kourou in French Guiana – Guiana Space Centre – as "Europe's Spaceport." However, the term is also used to refer specifically to a site from which commercial reusable launch vehicles can take off and land on conventional runways. The first such spaceports are still in the developmental stage. Among them is Spaceport America in New Mexico.