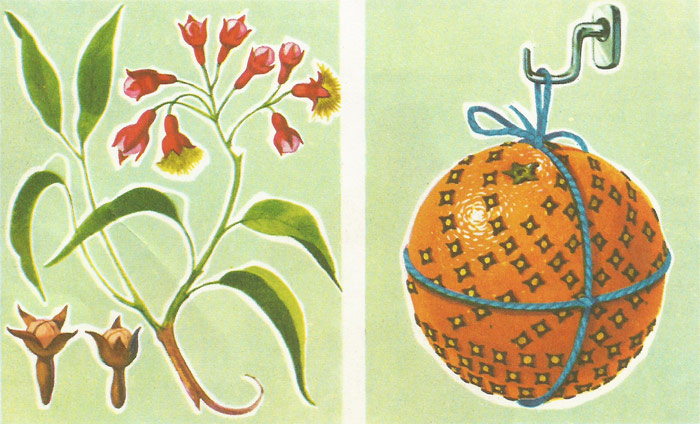 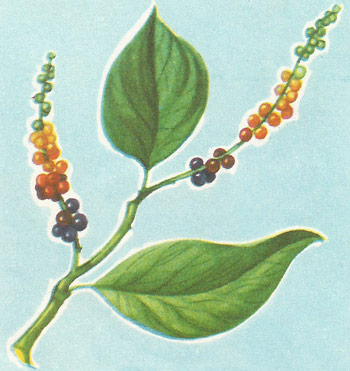 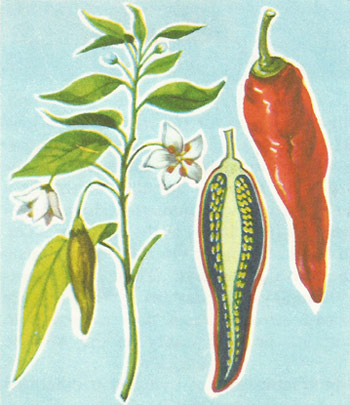 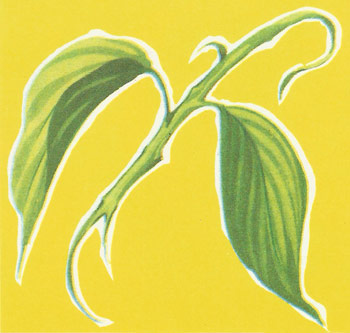 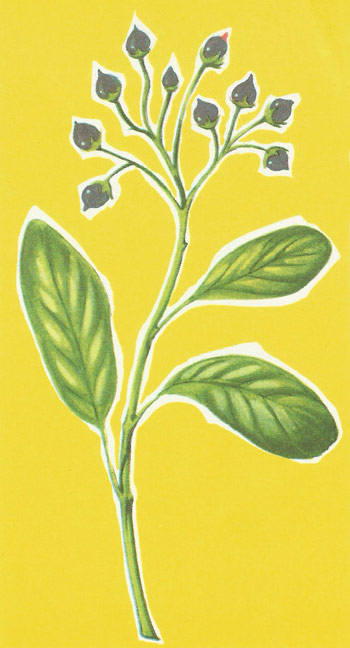 It is difficult today to realize how valuable spices once were: some of them were literally worth their weight in gold, and a bag of pepper was a gift fit for a king. The romantic history of spices stems from the earliest times, for there are many references to them in the Bible. Myrrh, cassia, calamus and cinnamon were used for 'lighting oil, and incense'. The camels of the fabulously rich Queen of Sheba travelled with gifts of spice for King Solomon.

Once brought from India and the Spice Islands by sailing ships, spices were a costly cargo, for tax was levied on them at each stage at which the voyage was broken. Egypt placed such heavy levies on spices that she succeeded only in driving away her main traders, the Portuguese, who were forced to create other routes to India at a consequent loss to Egypt.

In the year 1522 the first cargo of spices reached Amsterdam. The Dutch then set out to capture the Molucca Isles, which fell to them in 1605, and in which they planted groves of nutmeg and clove. Later, the French introduced these tow spices into Mauritius in the year 1744 and their cultivation extended to Zanzibar. The Dutch lost the Moluccas to Britain in 1796, but spice cultivation continued and spread into Malaya.

Today spices are an important form of world trade and are grown in such countries as India, the Moluccas, Banda, Isles Brazil, China, Penang, and Mediterranean countries, to name but a few.

Clove is an evergreen shrub having aromatic leaves and rosy-pink flowers, and comes from the Molucca Isles, Pemba, Mauritius, Brazil and the southern Philippines. The buds, or 'cloves', are picked before they come into flower. The clove was introduced into Europe between the 4th and 6th centuries. Traditionally, local subjects of Ancient China held a clove in the mouth while addressing their Emperor, so that 'speech was pure'. Oil of cloves is a powerful antiseptic and is mildly anaesthetic, and the Elizabethans made sweetly perfumed 'Pomander Balls' – oranges stuck with cloves – to hang in closets.

Nutmeg, from the Banda Isles, Malaya, Moluccas, and Sumatra, is a tree of about 25 feet. Oil of nutmegs was formerly used for removing freckles! An inferior type is native to Borneo and a wild kind grows in India. The best are said to be those from Amboyna. The shell containing the nutmeg is enclosed, within the fruit, by a scarlet covering, the 'arillus'. This, fried and powdered, becomes a second spice from the same tree, and is called mace.

Anise, an annual, grows in Greece, Crete, Egypt, Malta, and parts of Asia Minor. It has been much valued since the 14th century in Europe; it was used in Virgil's time and was recognized as legal part-payment of taxes. Some think the practice of making wedding-cakes originated in the spiced anise cakes enjoyed by the Romans.

Much loved by the French, it is used in liqueurs and cordials and has, besides, an established virtue in medicine. In Edward IV's time, housewives prized anise for filling linen bags to hang in their closets to perfume the air. It is also used for candy making, such as aniseed balls.

Calamus is a reed-like sedge, native to many European countries, Burma, Ceylon, India, China, etc. Sweetly scented, it is one of the principal spices named in Exodus 30, and was once freely used for strewing church floors and in cathedrals, such as Norwich, at major festivals. It is said the Cardinal Wolsey was reprimanded for his 'extravagance' in continuing the custom in his own rooms. This may be the calamus mentioned in the Bible, but some authorities consider that it was a kind of aromatic Gentian.

Pepper grows wild in India and is cultivated in the East and West Indies, Malaya, Malabar, and Siam. It is a vine, well known to the ancient Greeks. In the Middle Ages, pepper counted as third in value after gold and silver, and in AD 408 we read that the king of the Goths, laying siege to Rome, refused to withdraw his troops except on payment of a ransom of 5,000 lb of gold, 30,000 lb of silver and 3,000 lb of pepper! Venice and Genoa amassed vast fortunes from pepper-trading. It was accepted with taxes (origin of Pepper Corn Rents) in the Middle Ages.

'Black' and 'white' pepper are products of the same plant. To make black pepper the whole of the dried berry is ground. For white pepper the outer coat of the berry is removed, and only the seeds are ground.

Amalgo, or rough-leaved pepper, is a shrub found on the Jamaican hills; Hungarian pepper, or paprika, Cayenne, or capsicum, are other kinds.

Caraway, a biennial plant of about 2½ ft high, grows throughout Europe and Asia, but is believed to have been first cultivated by the Arabs. In Germany, Poland and Scandinavia it is widely used in bread-making , while Russians and Germans use its aromatic seeds in the liqueur known as 'Kummel'. It has many medicinal uses.

Cinnamon comes from many countries including Malabar, China, Sumatra, and Jamaica. A tree rising to 30 ft, it flourishes best in sand. The fragrant inner bark of the shoots is dried and powdered, and the berries – rather like acorns in their cups – are boiled to extract the oil, making a product called 'cinnamon suet'. Another species of cinnamon grows in the West Indies and Florida and is known as the White Cinnamon; the bark if this also is aromatic and is sometimes added to tobacco.

Dill, an annual grown in several European countries, is valued for its dried fruits and was mentioned by Pliny and early writers from the 10th century. Dill derives its name from the old Norse dilla, to sooth or calm.

Ginger is a tropical plant native to southern Asia and now cultivated in Africa, the West Indies Australia, and elsewhere. The part that is used is the underground stem or rhizome. This can be preserved in syrup, crystallized ginger are eaten in sweets and deserts, and powdered ginger is used in flavoring such things as ginger ale and ginger cookies.

Myrrh is the resinous gum of a small tree native to Arabia and eastern Africa. The Ancient Egyptians used it in embalming the bodies of the dead, and it has been valued from early times for making ointment and perfume. Its chief use, however, has always been for making incense in temples.

Turmeric comes mainly from Bengal and Java. It is used in food like curry and as a yellow dye.

Vanilla is obtained from the pods of certain species of orchids. Today it is cultivated in all parts of the tropics, but it originated from Central America. It is used to flavour chocolate, sweets, and ices.

Cassia comes mainly from Japan and Mexico. It was once used in brewing 'Hippocras', a wine of the Middle Ages. Dried leaves of the plant, known as senna, are used in the preparation of laxatives.

Allspice was given its name because it was believed to combine the flavor of several spices. It is used in mincemeat, puddings and cakes; also in mulled wines and for perfuming soaps.

Other spices include Zedoary from the East Indies; Cardomom from South India, used in Scandinavian liqueurs; and Coriander, beloved by the Peruvians. The spices found in Mediterranean countries are less 'hot' than their tropical relations but are no less pleasant, greatly improving the flavours and perfumes of many otherwise dull materials.